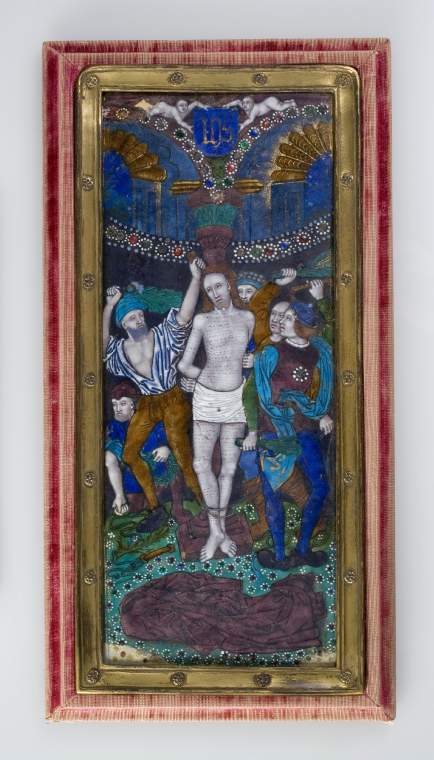 The Flagellation Copper decorated polychrome enamels, jewelling, and gilding Rectangular copper plaque with drawing in black over a white ground covered with translucent blue, turquoise, green, tan, and mulberry enamels, opaque red, white, and black enamels, blue, red, and green enamel jewelling over foils, and gilding. The counter enamel is not visible. Christ stands in the centre tied with his arms behind his back to a mulberry column. He is naked except for a white loin cloth and his arms, torso and legs are covered with horizontal lines of drops of blood. His mulberry-coloured cloak lies in the foreground on greensward scattered with numerous flowers with red and green jewelled centres and white dotted petals. Two men on the right and one on the left stand with their arms raised holding bunches of green twigs with which they are about to strike Christ. Another man kneels on the left holding a snaking cord in his right hand and a crown of thorns in his left. The head of another is visible behind the column. Above the figure there is a black drape bordered by a curved line of red, blue and green jewels with white dotted edges. Above it, two flutted arches with jewelled edges spring from the green capital of the column. In the spandrel between them is a green mask, and a blue shield bearing the mnogram IHS in gothic letters, held up by two putti who lie horizontally on the top of the arches. Remnants of lavish gilding are visible on the figures and arches. The narrow gilt-metal inner frame has eighteen flower headed rivets. The outer frame of the stand is covered in very worn crimson velvet and is backed by crimson damask with a hinged prop in the middle. Limoges, France C.1520