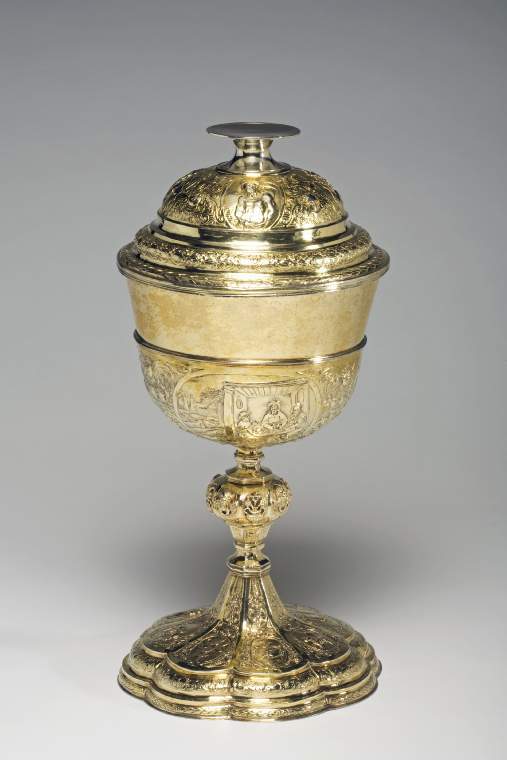 Ciborium and cover silver-gilt; large bowl with three carouches of Biblical scenes, the octofoil foot and domed cover similarly decorated. Silver-gilt; the large bowl has a slightly everted rim and sits within a shallow cup, which is embossed with three oval cartouches containing vignettes of Christ at Emmaus, the Last Supper and Manna arriving from Heaven. Between the three cartouches are formal arrangements of cherubs' heads, fruit and scrolling foliage on a striated ground. The octagonal stem has a large central knop applied with a border of alternating cherubs' heads and lilies in urns. The stepped spreading octafoil foot is embossed with eight oval cartouches containing Christian symbols, including the Agnus Dei, the pelican in her piety, the Good Shepherd, the lion of Judah and a lily for purity, a beehive, a wheatsheaf and a coat-of-arms with the initial 'W' above and 'E' and 'F' on either side. These are surrounded by formal borders containing cherubs' heads, fruit and scrolls on a striated ground. The stepped and domed cover is similarly decorated and is embossed with four oval cartouches depicting the Passions of Christ. The spool-shaped knop cum foot is undecorated and has a slightly concave upper surface.