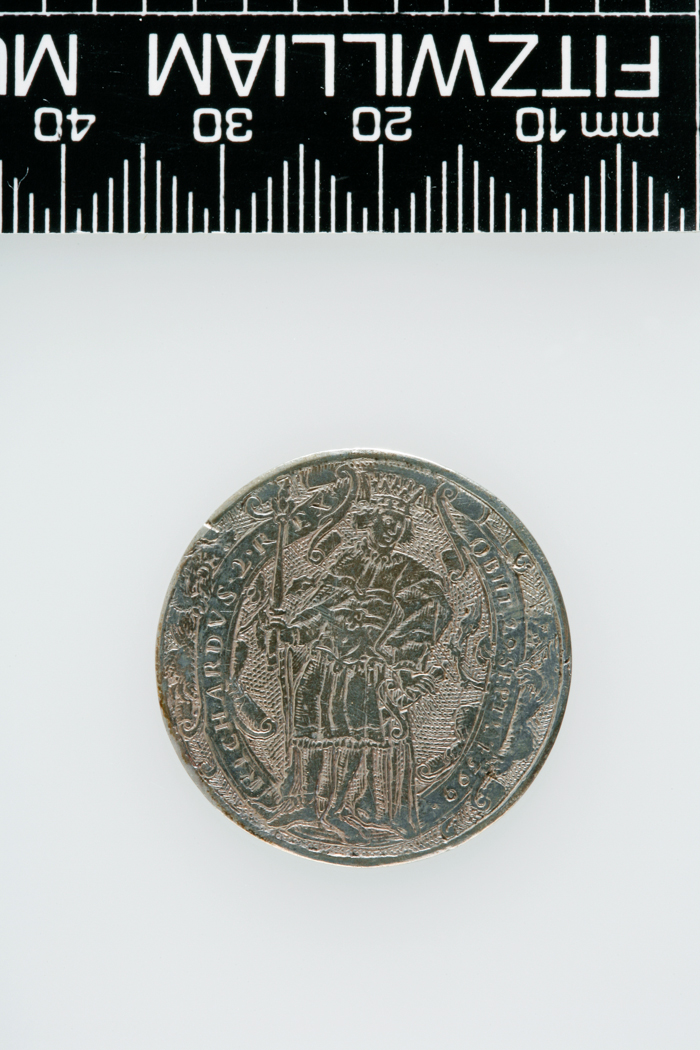 Counter Box containing 32 counters Counter box. Silver, the box pierced, chased, and engraved, containing thirty-two engraved silver counters of English monarchs and their children Counter box. Silver, the box pierced, chased, and engraved; the counters engraved. The box is cylindrical with a detachable lid. The base is decorated with a bust of Queen Henrietta Maria in profile to left in low relief in an open oval medallion with pairs of inwards scrolls above and below, and S-scrolls on either side, with a cut away background. The top bears a bust of Charles I in profile to left in an open oval medallion surrounded by four paired scrolls with single scrolls between them, with a cut away background. The sides have two panels each containing pierced scrolling foliage and a monster. The counters are circular, and are engraved with monarchs and coats-of-arms respectively on the two sides: Prince Charles (d. 1130), Edward the Confessor, Willima I (2), William II, John, Edward I, Edward II, Edward III, Edward IV, Edward V, Edward VI, Henry I, Henry II, Henry III, Henry IV, Henry V, Henry VI (2), Henry VII, Henry VIII, Richard I, Richard II, Richard III, Mary I (2), Elizabeth I, Henry father of King James I and VI, James I and VI, Charles I, Elizabeth of Bohemia (his sister), Charles Louis Count of the Palatinate (her son) English C.1640-50