Couter and lower cannon of a vambrace 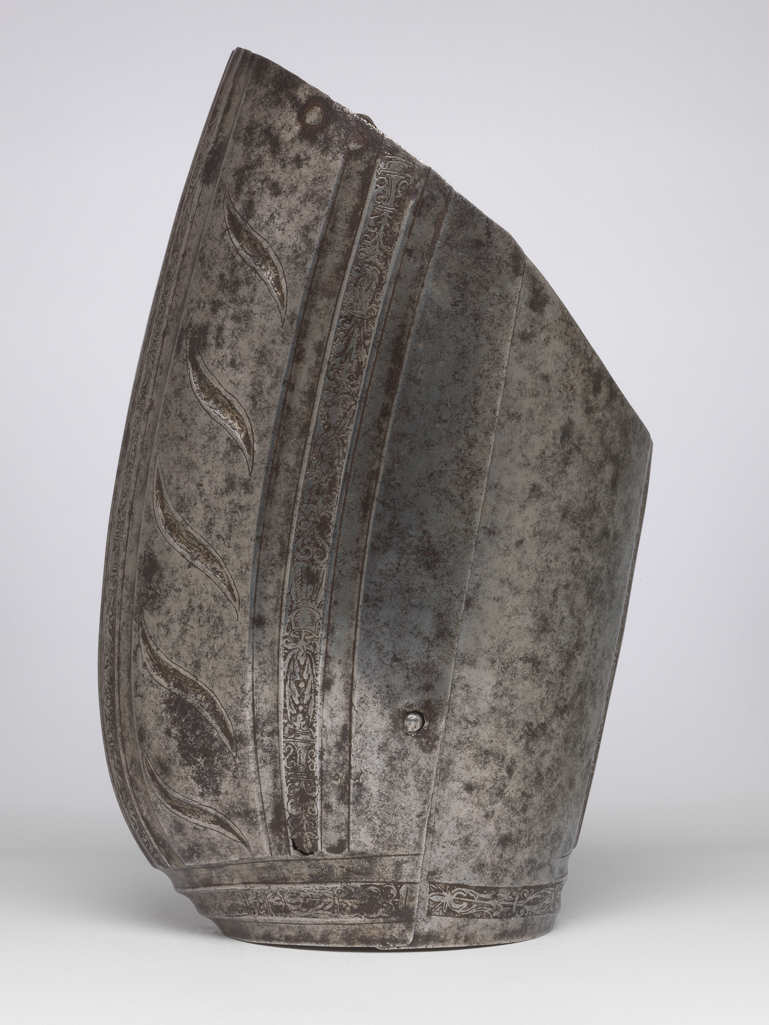 Armour. Couter and lower cannon of a vambrace for the right arm, for parade use, with 'puffed-and-slashed' decoration in imitation of civilian costume. Production Place: South Germany. Helmschmied, Koloman (German, 1470/71-1532). The couter is formed of a single, large, shell-like plate, open at the rear and strongly shaped to the point of the elbow. Its outer edge is nearly straight. Its upper and lower edges are convex and converge at the inside of the elbow in a strong, medial pucker. The upper and lower edges have inward turns, roped with pairs of incised lines. The turns are each accompanied by a recessed border which is itself accompanied on the front by a flute separated from the border by a raised rib emphasised by a pair of incised lines. The boss over the elbow is enclosed by two groups of three flutes, each emphasised by pairs of incised lines, that converge to the inside of the elbow. Two vertical groups of such flutes decorate the front of the couter both above and below the boss, while three more decorate the boss itself. The broad bands intervening between these groups of flutes are decorated with slender, diagonal, slightly recurved, recessed 'slashes' in imitation of those found on contemporary civilian costume. The front and rear of the central boss are each fitted with a pair of horizontally-aligned rivets for the attachment of a missing pair of vertical internal leathers that formerly connected the couter to the upper and lower cannons of the vambrace. The outer end of the couter is filled with a pair of widely-spaced, externally-flush rivets for the attachment of a missing bifurcated strap that terminated in a buckle to receive the missing strap that was formerly retained internally by a brass-capped, round-headed rivet and octagonal internal washer located just to the inside of the medial pucker, and passed around the rear of the elbow. The lower cannon is of tubular form, cut away in a concave curve towards the inside of the elbow, and constri