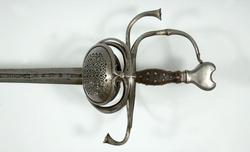 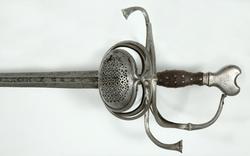 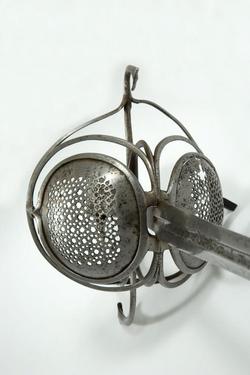 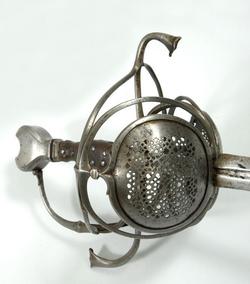 Rapier. Massive pommel, rectangular in plan with an elegant neck of two collars against the grip. It is vase-shaped with the top scooped out into a deep hollow. Grip of oval section, swelling vigorously in the middle, covered with dark brown (perhaps once red) leather, embellished with steel studs. The guards are of diamond section, consisting of knuckle-guards, two loop-guards, quillons, branches and large outer ring-guards enclosing big secondary rings, which are filled with steel plates neatly pierced with star-shaped and circular holes. The quillons are strongly recurved vertically, in the plane of the blade, the tips widening, flattened and turned over in scrolls, with a small hump at the midpoint of each scroll and little peaked horns at each end of the scrolls. The top of the knuckle-guard and the upper rings widen to transverse ridges at their midpoints; the upper ring-guards are joined to the lower plate, enclosing rings with small D-shaped elements supported by double swags which are forged in one with lower small rings. The back-guards are mirror-image of the forward ones. There is no decoration. Blade of flat hexagonal section with a strong fuller at the forte, engraved with DE PEDRO DE VAL (on the outside), MONTE EN TOLEDO (on the inside).
Norman hilt type 67. Pommel 64.

This is an example of a type of hilt known for the past century to collectors as a Pappenheimer hilt. This is because it was thought to be a type used by the cavalry of Gottfried Heinrich, Graf von Peppenheim, an Imperial General of the Thirty Years War, or because part of a rather similar hilt is shown in an engraved portrait of him by Wentzel Hollar. A very good example is shown in a portrait of Jacob Bernouilli dated 1632, an Amsterdamer who had settled in Basle, and another is shown in the painting 'A Game of Cards' by a member of the school of Gerrit van Honthorst, now in the Alte Bibliotek at Munich (Inv. No. 6097). Actual examples of these swords are common, but most are rather undistinguished. Outstanding examples can be found in the Wallace Collection (A.645), the Victoria and Albert Museum (M.50-1946) and a third (once in the collection of Claude Blair), is in a private collection. The last example is illustrated in the Catalogue of the Third Park Lane Arms Fair at the Dorchester Hotel (1986), p. 32.

Inscription present: on the inside

Inscription present: on the outside