Top two lames of a spaudler for right shoulder 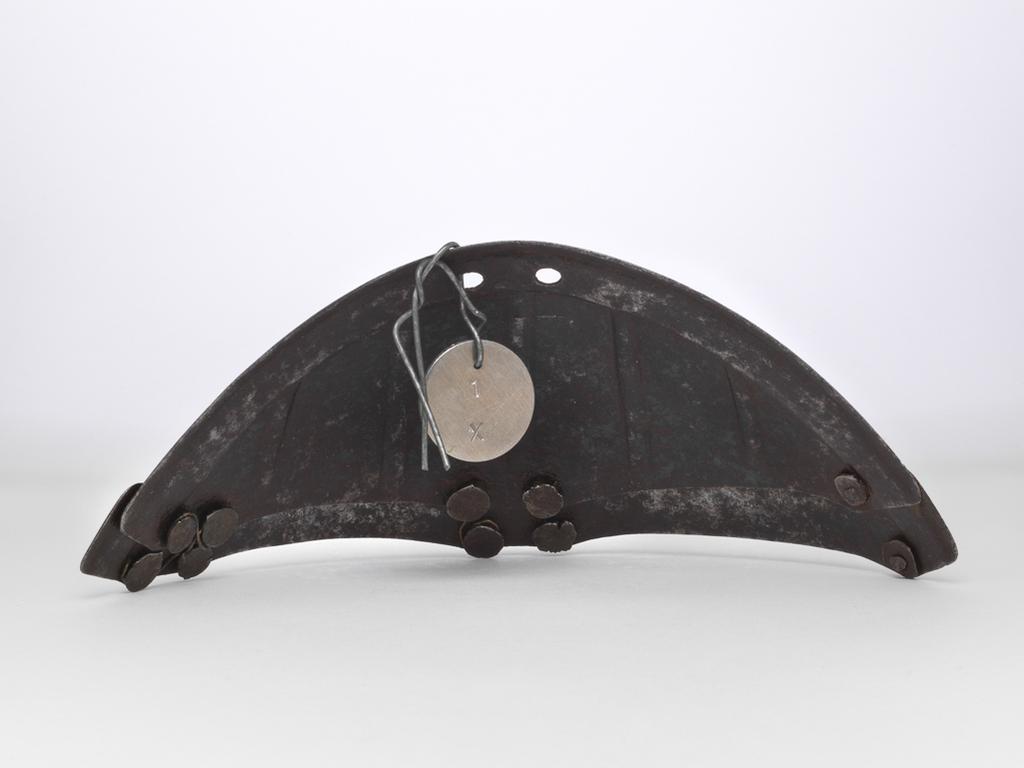 Armour. Top two lames of a spaudler for the right shoulder, for parade use, with 'puffed-and-slashed' decoration in imitation of civilian costume. Production Place: South Germany. Helmschmied, Koloman, armourer, possibly (German, 1470/71-1532). Consisting of two upward-overlapping lames of which the first is considerably deeper than the second and has a convex upper edge running into the lateral edges of the latter. This edge has a plain, partial inward turn accompanied by a recessed border decorated with an etched 'candelabrum' design on a plain, blackened ground. The first lame is decorated below this border with five, slender, vertical 'slashes' in imitation of those found on contemporary civilian costume. The upper edge of the second lame has a plain, partial, inward turn between the main borders at its outer ends. The lames were formerly connected to one another and to successive lames by brass-capped, round-headed rivets with irregular, internal washers at the rear, and by internal leathers secured to each lame by pairs of externally-flush rivets at the front and centre. All the rivets are preserved, but the rear rivet of the second lame lacks its brass cap. Both internal leathers are now missing. The inner end of the second lame is fitted with a decorative, brass-capped, round-headed rivet, occupying a construction-hole that aligns with the outer pair of rivets that formerly attached the front leather to the first lame. The apex of the first lame is pierced with a pair of circular lace-holes to attach it to the collar. The lames are bright with patches of medium to heavy patination overall. Hammered, shaped, riveted, with a recessed border and etched decoration on a blackened ground. Height, whole, 9.8 cm, maximum, width, whole, 18.3 cm, maximum, depth, whole, 6.5 cm, maximum, weight, whole, 0.097 kg, c. 1520. Provenance: From the armoury of the Princes Radziwill, Castle of Niescwiez, Poland.