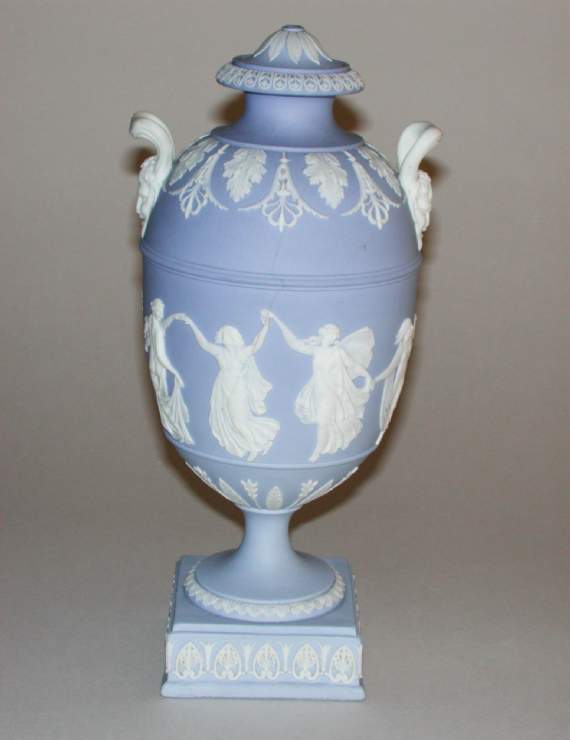 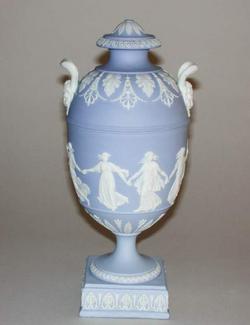 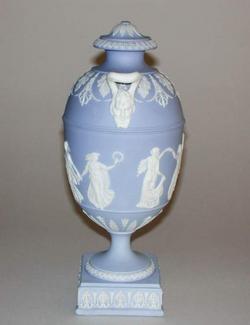 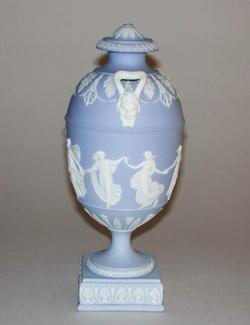 Jasper, solid pale blue with white reliefs. Ovoid with circular pedestal foot on square plinth, two vertical handles with grotesque masks below on each side of the shoulder, short curved neck with everted rim, and circular domed cover with ball finial and internal cylindrical stopper. The foot and stem are held together by a rod, disk and square nut. The plinth has a border of honeysuckle motifs. The edge of the foot is decorated with alternate acanthus and laurel leaves. The lower part of the vase has alternate stems and elliptical leaves. The sides are decorated with eight female figures holding hands, known as the Dancing Hours, between two raised horizontal bands. On the shoulder there are alternating acanthus leaves and anthemion between palm leaves. On the rim, ovals containing a plant. On the centre of the cover, radiating laurel leaves.

The Dancing Hours represent the Horae, personifications of the hours of the day. The first known mention of the design is in a letter of early 1778 from Josiah Wedgwood I to Thomas Bentley (E.25.18847). There is no direct mention of Flaxman having modelled them, but they are mentioned along with the Apotheosis of Homer and Marriage of Cupid and Psyche, which were definitely by him.The Dancing Hours first appeared on a tablet, no. 205 in the 1779 Catalogue . . ., but was also used for mantelpiece friezes, teapots and other wares.

The design for the figures was probably derived from engraved book illustrations after a Greco-Roman marble frieze, The Borghese Dancers or Dancing Hours, now in the Louvre (reserve). See Documentation. Another possible source was a chimney piece of white marble against blue lapis lazuli formerly in the Palazzo Borghese in Rome, which in the 18th century was installed in Moor Park, Herts, home of Sir Lawrence Dundas, and is now in the Lady Lever Art Gallery.

This vase may have been made in the Wedgwood & Byerley period, or after the reintroduction of solid jasper in 1844.