Folding fan, double paper leaf, painted in polychrome watercolour and body colour. Sticks pierced, carved and painted ivory; guards carved and painted ivory inlaid with tortoiseshell and mother-of-pearl (20+2); rivet set with clear pastes. Indistinct inscription in the bottom left corner on the reverse. Front: three theatrical scenes. In the centre, Mars is kneeling with a shield and Venus holding a helmet; on the left; perhaps Venus with a mirror, leaning her arms on a plinth with a sphinx; beside her a tambourine on an open book of music; on the right, two women are sitting and leaning back towards the other on the right who is stepping onto a footstool; in the background, two columns on a podium behind Mars, and a vase on a pedestal. Top left and right borders are of a colourful and striped foliage with grapes, and a small curtain and tassels in the top right half; the top and lower edging are of a gold foile, the right and left edges have a gold line. Back: in the middle, a couple in contemporary dress and a man watching them from behind a tree. A big tree in the background, small trees on the left. Top border of gold striped swags of drapery in puce and blue; bottom left border painted with a gold line. Sticks: in the centre, between wavy lines, animals including two hounds and a deer; buildings right and left. On top, squirrels, birds and putti in scrolling foliage; underneath, pairs of sheep, leaves and blossoms. Parts of the sticks are shaped to produce a pattern when open. The reverse shows the same scene in reversed order with fewer colours used and without carved parts. Guards: both guards are decorated in the same way: shoulder of tortoiseshell inlaid with three diagonal stripes, the top and bottom ones are ivory, the middle one is mother of pear; the right and left border are also mother-of-pearl. Guard proper: Outer border mother-of-pearl, inner border tortoiseshell, inner part of carved and painted ivory; wavy, scrolling ornament with pairs of animals, a house, a bird and a shell on top. 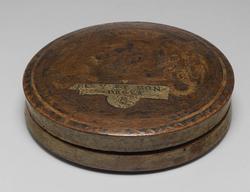