Double leaf paper, painted in bodycolour and watercolour and gilded. Sticks of ivory inlaid with engraved mother-of-pearl, marbled and coloured lacquer and silver piqué. Guards of ivory and applied tortoiseshell inlaid with mother-of-pearl, coloured and marbled lacquer and silver piqué, thumb guard of mother-of-pearl (16+2). Rivet of mother-of-pearl. Front: Fête galante, with twelve people on a pavement with water in the foreground. On the left, two boys with baskets of grapes and fruit are serving a table; two women are sitting in the foreground, one with her arm on a cushion, the other courted by a kneeling young man. In the centre there is a sitting man and men playing a cello and a hurdy-gurdy. On the right, a drunken young man is courting a woman with a bottle in his right hand; between them in the background, a couple is sitting on the edge of the pedestal. In the background a naked statue standing on one leg with a drape over his hand, a fountain and a tree can all be distinguished. In the right corner, there is an urn on a pedestal with a satyr mask spouting water; in front of the sitting woman on the left there is an open chest with ribbons and to her left a statue of a bird is spouting water from its beak. The top is bordered with swags in different colours and decorated with gold. The top edging is of gold foil; the lower edging is painted in gold. Back: On a white background and a green floor with three trees, the right scene from the front leaf with the drunken man courting a woman is copied. The top border is decorated with similar swags. Sticks: in the centre a cartouche showing a couple, a winged child with a tail and a lion flanked by two sitting eagles is worked. On the right, the stick between the lion and the eagle is missing. The first four sticks on either side form cartouches, a bowl surrounded by flowers and two birds, but on the left side the second stick is missing; on top of each stick there is a shell. The reverse of the sticks is decorated in the same way. Guards: both guards are decorated in the same way: Panels of mother of pearl with lacquer insertions and a little of mother-of-pearl near the top

Purchased with a grant from the National Heritage Memorial Fund and a gift from the Friends of the Fitzwilliam. 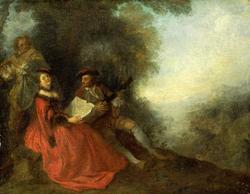 Music party in a landscape 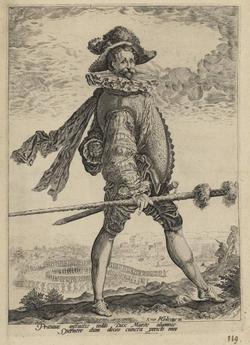 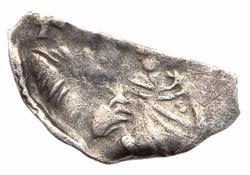