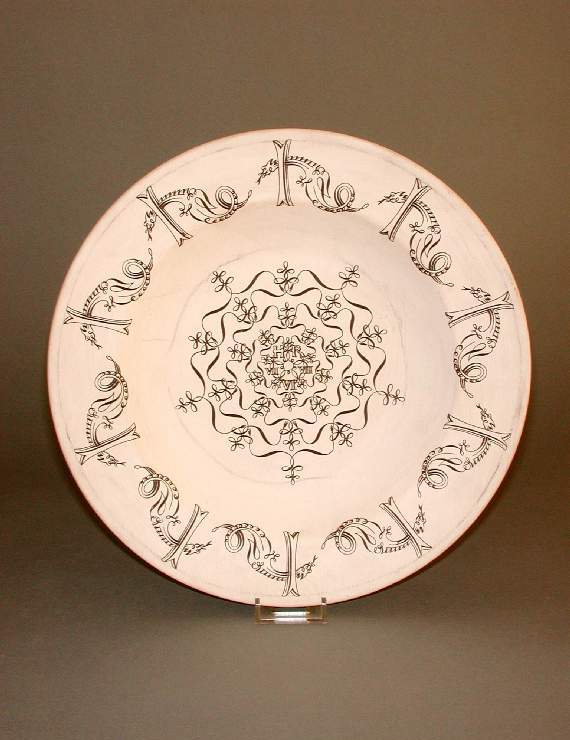 Cream-coloured earthenware soup plate. In the middle is a five-layer Tudor rose made up of wavy ribbons and true lovers' knots, over the centre of which are the initials 'HR' with below to left 'VII', to right 'VIII' and below them, 'VI'. On the rim are ten ‘h’s, each formed by a dragon with its neck through a cleft stake.The underside is undecorated and has a narrow raised foot-rim. There are rough (pencil?) circles around the rim and inner design, perhaps to indicate where gold might be added.

King’s originally only ordered the 10” dinner plate, but added the 9” pudding plate in 1956 and the soup plate a couple of years later. The Fitzwilliam holds an example of each, as well as this unglazed sample of the soup plate and examples from Guyatt’s ‘Oranges and Lemons’ lemonade set and of commemorative mugs he designed for Wedgwood, as well as Wedgwood Queen’s ware designed by Eric Ravilious.

Richard Gerald Talbot Guyatt CBE (1914-2007) began his career as a freelance graphic designer with posters for Shell-Mex and BP and book illustrations. At the Royal College of Art, where he was a professor from 1948 and later rector, he lead the introduction of education in graphic design and influenced subsequent expansion into typography, illustration, printmaking, photography, film and television design. From 1952-55 and 1967-70 Guyatt was consultant designer to Wedgwood. The company had revived the use of engraved designs in the mid 1930s – a mode of decoration which allowed the artist’s own work and ‘hand-writing’ to be reproduced in a factory setting, and well suited to Guyatt’s style. His design for this dinner service for the High Table of King's College, Cambridge, was recorded on 18 March 1954. The body was recorded as ‘CC’ (cream coloured earthenware, or ‘Queen’s ware’), and pattern book entry, no. G5558, notes it was first ‘printed in sepia, gilt, with a narrow band at edge line below verge in gold which was sanded’, though later versions are printed in black. Since 1971, when the College ordered a new 2,500 piece service, it has been made in metallized bone china with over-glaze printing, by Wedgwood's Hotel Division. The design is based on various motifs in the tracery lights of the King’s College Chapel windows. The central Tudor Rose encloses the ciphers of Henry VI, who founded the College in 1441, Henry VII and Henry VIII.