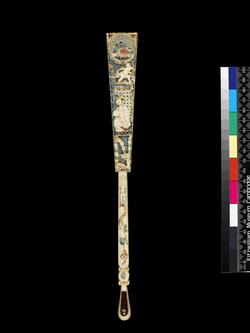 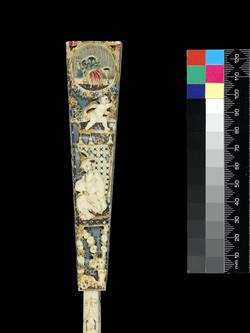 Double leaf of paper, painted in bodycolour and gilt. Sticks and guards of pierced, fretted, carved, painted and gilt ivory (10+2), the piercing of the guards backed with blue silk, and the head strengthened with tortoiseshell.
Rivet set with clear pastes. Front: On the left, a butterfly hovers over a rock and a flowering tree, towards which walks a man carrying two buckets on a yoke. On the right, a butterfly hovers over two men seated beside a fence, separated from the walking man by a bare tree.
Reverse: An asymmetrically placed spray with two cherries. Sticks: A split design comprising an oval cartouche containing two putti and a black swan, surmounted by a Chinese figure, to the right of which is a seated man holding a violin. At top right and left, an oval cartouche containing a glass and bottle. All separated by columns twined with flowers. Guards (both the same): On the upper part, a seated man with above, a putto and a circular cartouche containing a bottle, carrots and a wine glass, and below a vase of flowers; on the lower part, a spray of flowers with a parasol at the top.