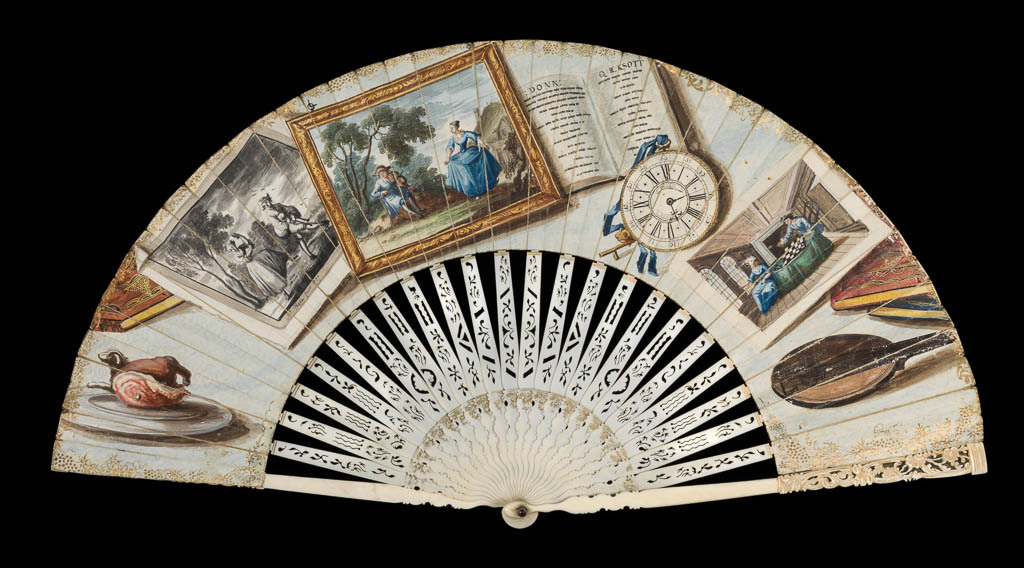 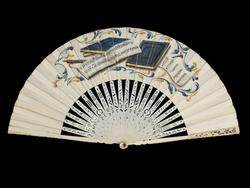 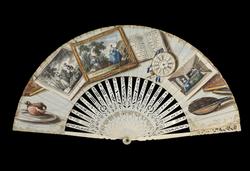 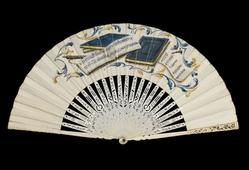 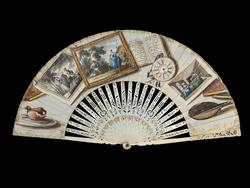 Single leaf of skin ? painted in bodycolour and gilt. Sticks of bone, shaped, pierced and gilt; guards of pierced, carved and gilt bone (21+2). Rivet set with garnet pastes. Front: Painted overall with a trompe l'oeil design comprising from left to right: a leg of ham on a dish; a dog; part of a book; a print, painted en grisaille with a man playing bagpipes to the music of which a woman is dancing and playing castanets, signed 'Jno Faber fecit 1757'; a framed, coloured landscape in which a woman is dancing to the music of a violin played by a man seated under a tree; an open book inscribed DONN QUICKSOTT; a watch inscribed '-(J)EWELL' and 'LONDON'; a coloured picture of a man and woman playing draughts in a panelled room; two books and the sound box end of a lute. The edges have borders of gold vine. Reverse: Painted in blue, yellow, black and brown, three closed books, an open book of music, a sheet of music and a flute, surrounded by scrolls. Sticks: The lower part of each stick is shaped, the upper part is straight and tapering and pierced by simple geometrical and plant motifs. Where the shaping ends there is a band of gilt plant ornament. Guards: Lower part plain and shaped; the upper end carved in low relief and pierced with a design of scrolls and flowers, bearing remnants of gilding.

The front has a trompe l’oeil design including an open book titled ‘DONN QUICKSOTT’ and a watch inscribed ‘(J)EWELL/LONDON’. On the back there are open and closed books, a sheet of music, and a flute. 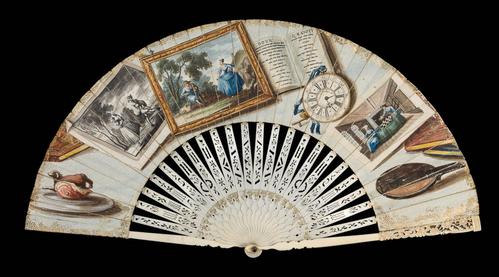