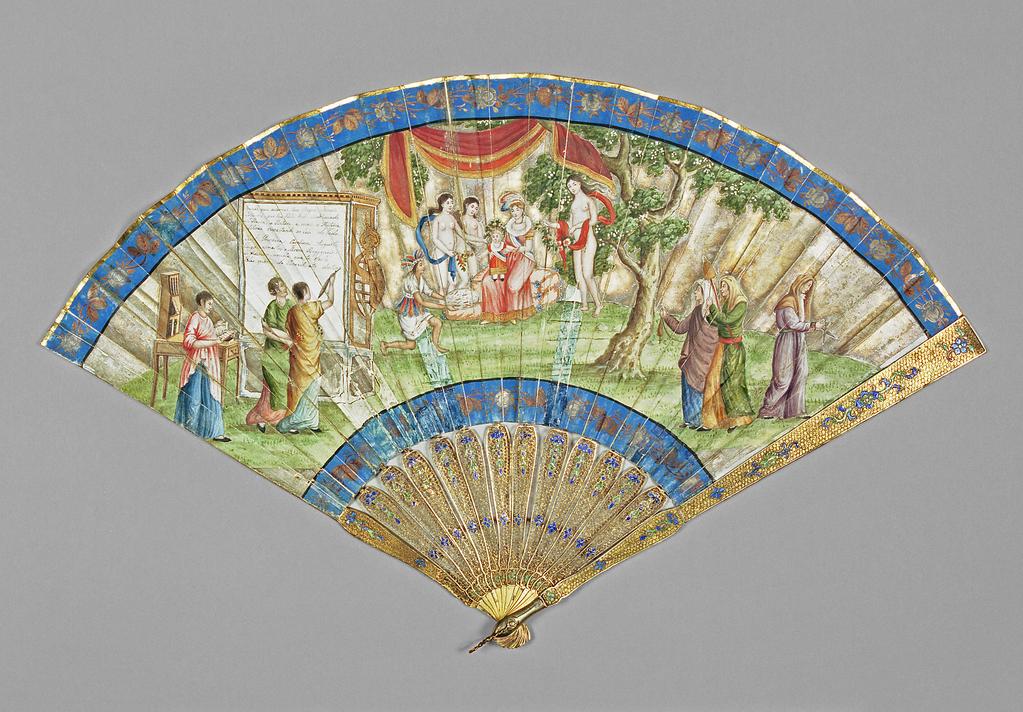 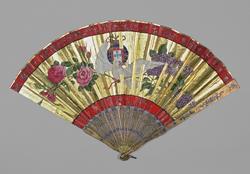 Double paper leaf painted in water-colours, bodycolour, gold and silver. Gold paper binding on upper edge. Sticks and guards of silver-gilt ? filigree with enamelled decoration (12+2). Rivet of brass ? with twined wire loop.
Front: A Brasilian native offers a dish of gold nuggets and diamonds to the child of a princess of the house of Braganza, who is seated in the centre under an awning hanging from a tree, accompanied by three female nudes (perhaps the Graces). On the right, the three Fates, one holding a pair of scissors, one, a distaff and the third the spun wool with a cross-shaped spindle whorl below. On the far left a woman reading a book, stands beside a desk-cum-bookcase and two more are writing on a screen from which is suspended the arms of Portugal. The inscription reads: Gracas que adornao tua Regia Fronte/Virtudes qu tea Peito hao sublimado/A Poesea, a Pintura e mais a historia/Celebrao respectando as leis do Fedo/ [...]Princesa Carolina Augusta/Tu que cimaltaj o Throno Brigancino/O T acceta que te offerta/[...]do Brazil atto de [...]. Above and below, blue borders decorated with gold and silver leaves and flowers.
Reverse: On a gold ground, the arms of Portugal superimposed on a globe, resting on the back of a white dove, flanked by hydrangea flowers and roses. Red borders above and below, decorated with gold foliate scrolls and flowers.
Sticks and guards: Single blue and green flower heads and stylized leaf and flower sprays.

Chinese for the Portuguese or Brazilian market. The house of Braganza was the ruling dynasty of Portugal from 1640 to 1910, and of the empire of Brazil from 1822 to 1889. On England's advice, the royal family left Lisbon for Brazil in 1807, just before the French invaded Portugal, and arrived in Brazil in early 1808. They did not return until 1821. The inscription on the fan is puzzling because there was no princess named Carolina Augusta in the Portuguese royal family. Possibly this was written in error for the Spanish Infanta, Carlota Joaquina, wife of Joao (John) VI of Portugal, whose second son, Pedro (1798-1834), became heir to both Portugal and Brazil in 1816, and after his father's return to Portugal, become Emperor of Brazil in 1822. 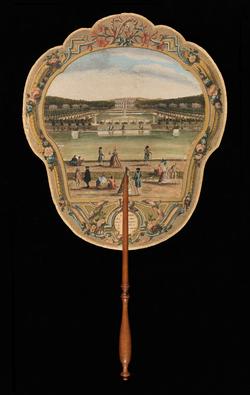 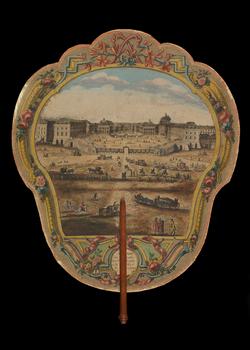