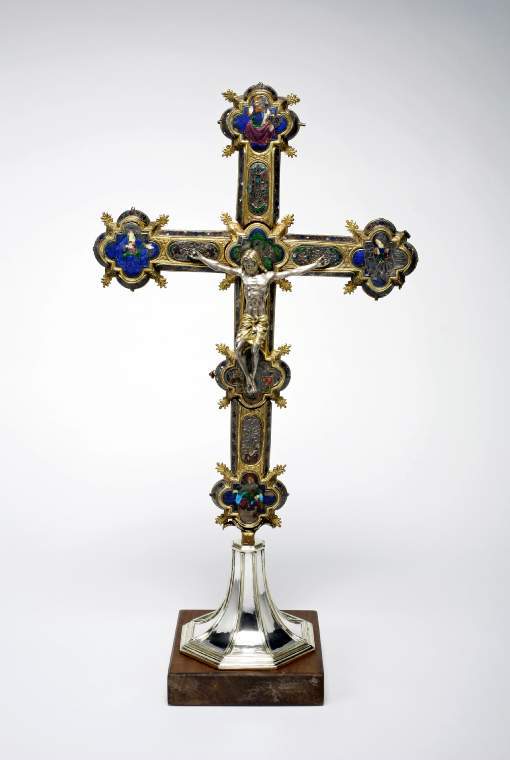 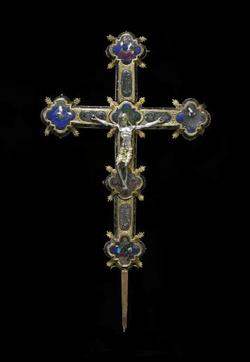 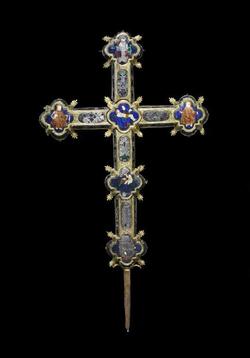 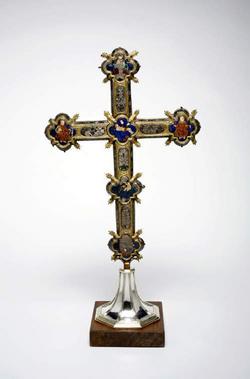 Silver, parcel-gilt, bronze-gilt, wood and enamel; the wood crucifix is encased in bronze-gilt. Each arm of flattened hexagonal form terminates in a fleur-de-lys. Set into the bronze-gilt are oval panels of silver engraved and enamelled with flowers. At the end of each arm, at the top and centre, and twice on the stem are silver engraved and basse-taille enamelled quartrefoil plaques. In the front, behind the parcel-gilt model of Christ, the plaque represents the pelican in her piety, above is God the Father, on the left is the Virgin Mary, on the right is a female saint, possibly Mary Magdalene, under Christ's feet the images on the plaque are not decipherable, except for a scull, but applied on each side are two coats-of-arms for the Franciscan Order and the Frescobaldi family, at the base is a martyred saint. On the back the plaques represent, in the centre, the Pietá, above is a bishop, on the left an unidentified canonised monk, on the right St. Augustine, below are the Virgin and Child, and at the base is the Virgin Mary or female saint. The silver trumpet-shaped ocatagonal base with silver-gilt moulded borders is later. The later stand (A) is rectangular and of wood. The later box (B) is covered with leather and has two half lids, which are hinged and have catches; the interior is lined with white velvet.

There are no maker's or town marks.