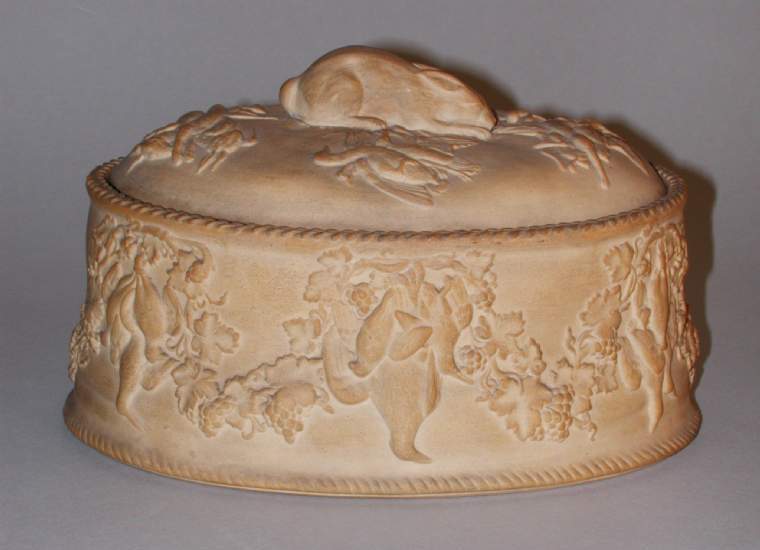 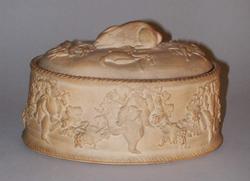 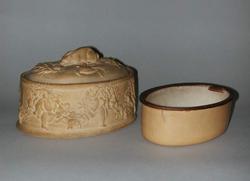 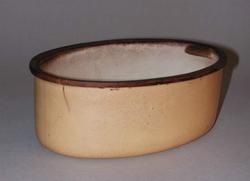 Oval dish of dark buff-coloured stoneware, or ‘caneware’, moulded to simulate a decorated raised pie crust. The sides are decorated with swags of fruiting vine and hanging game birds and a narrow rolled band at top and bottom edges, the cover with game birds and dead rabbits. A central rabbit finial provides a handle for the cover. The dish has vertical mould marks at either end and an inner rim which supports the cover; it is glazed on the inside beneath the rim.The underside is very slightly concave with no foot-rim. The liner is undecorated, but of paler colour on the inside and with small ‘handles’ inside each end; it is glazed inside and out, except for the rim which is coloured with a brown stain.

Given by Mrs Laurence Humphrey

Mid 19th century
Victoria I
Production date: circa AD 1850 : Accessioned as c. 1800. It is possible that liners were introduced earlier than mentioned.

Caneware, introduced in the 1770s, is generally found unglazed except for the interior of tableware. In 1786, Richard Lovell Edgworth suggested to Josiah Wedgwood that ‘oval baking dishes… in the shape of raised paste pies…would be a saleable article’ and the Oven Books record some 4,000 decorated ‘cane piys’ made in 1794-5, the first year of production. Other potters followed suit, and such pie dishes moulded to mimic pastry, or sometimes in the form of animals or game birds, became particularly popular in the early years of the 19th Century when flour was in short supply. The Staffordshire Advertiser of 3 May 1800 records rioters seizing potatoes and flour and the Royal Household forbade the use of flour for pastry.

The moulded decoration on this example, and the separate stoneware liner, suggest a date of c.1850. Earlier examples are decorated with applied reliefs, but from c.1840 the decoration was moulded with the body. In 1850 Wedgwood introduced a glazed stoneware liner, or ‘pie middle’, which could be used for cooking meat or game in the oven and then placed inside the warmed pie dish before serving. The university colleges were the largest customer for these lined pie dishes, which were available in four sizes.

The oval game pie dish was no. 2006 in the Wedgwood Shape Book rebound in 1916 with watermark for 1794. Also no. 2006 in the 1880 illustrated Catalogue. The list of Wedgwood exhibits for the Great Exhibition includes 'Oval game pie, cane colour'. Game pie dishes in cane body and majolica glazes were still listed in the price books in 1901. 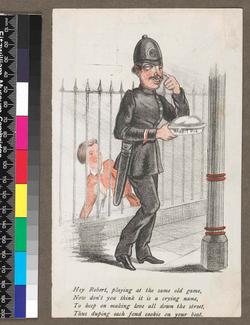 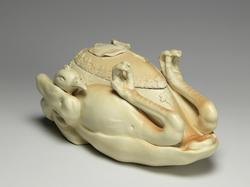 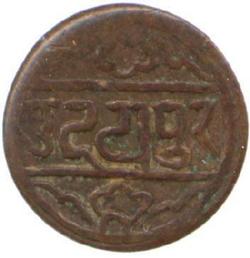 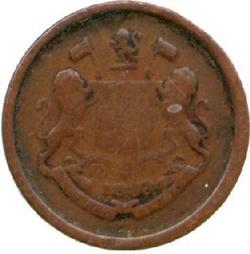