Soft-paste porcelain, moulded, glazed and painted in green, yellow, lavender blue, purple, dark brown and black enamel-colours. Circular with a slightly upturned wavy edge, sloping rim and deep curved well, standing on a footring; three spur marks on base. The front is decorated with a composition of three plants: an anemone flower, amaranthus leaves, a stem of holyhock buds, and two buds above the anemone, a seed cut in half, accompanied by three moths; a dark brown line on the edge of the rim.

Bequeathed by Miss Statham, accepted by H.M. Government in lieu of Inheritance Tax and allocated to the Fitzwilliam Museum

Chelsea porcelain tablewares with botanical designs were described as decorated with 'India Plants' referring to the West Indies, rather than to the Oriental Indies as was usually the case when the Indies were referred to in the 18th century. For example, in the Chelsea Sale Catalogue of 1755, lot 36 on the second day comprised 'Twelve very fine desart plates, India plants, all different'. In 'Faulkner’s Dublin Journal' an advertisement on 1st July 1758 for a sale to be held in Dublin on 4th July and following days, described them differently as 'Table Plates, Soup Plates, and Desart Plates, enamelled from Sir Hans Sloane’s Plants'. Sloane (1660-1753), had been born in Ireland, and in 1687 had visited Jamaica. On his return he played an important role in the advancement of botanical studies, and the development of the Chelsea Physic Garden. Older publications often refer to this class of porcelain as being decorated with 'Sir Hans Sloane's Plants', although the designs were derived from works by several botanical artists. The design on this plate featuresa spray of Alcea rosea (hollyhock) buds, a flower which is not the flower of that plant, but probably an anemone, accompanied by leaves probably of the Amaranthus tricolour, as they appear pink and two shades of green on another plate of similar design. The hollyhock buds may have been derived from J.W. Weinmann, 'Phytanthoza iconographia', Regensburg, 1737-45, no. 693, and the other two plants from B. Besler, 'Hortus Eystettensis', Nuremberg, 1613, 1640 and 1713; vol. I, pl. 34 and vol. 3, pl. 339. 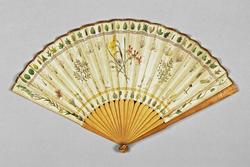 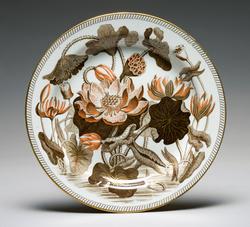 Plate from the Darwin Service 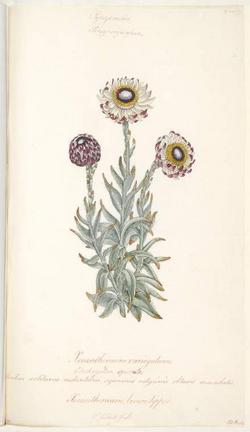 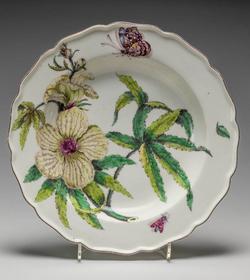