Ovoid body with a short cylindrical neck, a projecting spout and a scalloped rim. The handle is moulded to suggest leaves and rises up above the rim. On one side is an applied, white stoneware relief bust of William IV, dressed in in regal robes and set amongst roses, shamrock leaves and a thistle; on the othr side is a similarly presented bust of Queen Adelaide. On each side of the neck is an applied white sprig design og royal regalia set on a cushion, with flowers and foliage. The ground between the reliefs is covered with a moulded trellis containing four-petalled flowers, with a scallop-like leaf beneath the spout. The interior is fully glazed, the outside and recessed base are smear-glazed.

Method of acquisition: Given (2006-07-17) by The Friends of the Fitzwilliam Museum

Relief moulded jugs were popular in mid 19th Century homes. The smear-glazing makes the most of the way that colour-stained clays show off crisply-moulded ornament, whilst the stoneware would be durable in an everyday setting. There are several examples in the Fitzwilliam Collection.

This is the earliest dateable relief-moulded jug design made by Minton. As with some other early jugs of this type, the decoration of the two part prss-moulded body has been enganced by the application of moulded reliefs in a contrasting colour. William became King on the death of George IV, on 26 June 1830, but he and Queen Adelaide were not crowned until 8 September 1831; they reigned until 1937. The earliest date for this jug is thus 1931. It was perhaps made to commemorate the Coronation. 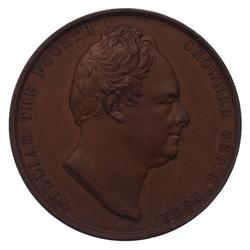 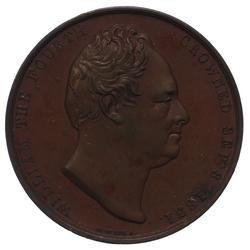 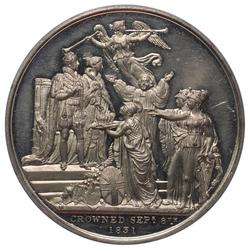 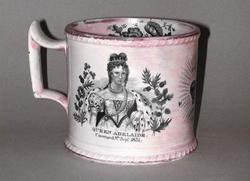