Buff stoneware, slip-caste, with applied handle and spout, and separate cover, glazed brown, and painted in matt ochre, and shiny old-gold, and red. The cylindrical body tapers to just above the top of the spout, and then expands slightly to the rim. Inside the neck 3 cm down, there is a ledge on which the cover rests. The spout slopes upwards, and the ergonomically-shaped strap handle forms three sides of a square with the lower side longer than the top. The cover has a deep flange, and a low conical top with a squat knob with sloping sides, a narrow rim, and a semi-circular depression in the top with a central steam vent. The exterior of the pot is decorated with 'Arabesque' pattern, comprising ochre and old-gold circles of different sizes, two large circles on each side containing ochre multi-petalled flower heads with red centres, two large circles under the handle and spout containing a old-gold multi-petalled flower without a centre, and the small circles have either a red or an old-gold spot. The top of the cover and the sloping rim of the cover are painted in ochre.

Method of acquisition: Given (2006-10-09) by The Friends of the Fitzwilliam Museum

Arabesque was designed by Gill Pemberton c. 1962-3, initially for a suite of three jars, a large goblet and a salad bowl, and was extended to tea, coffee, and dinner ware. This coffee pot epitomizes the chunky shapes and bold patterns fashionable in the 1960s and 70s. 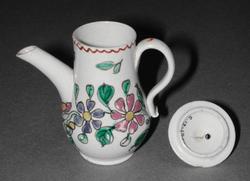 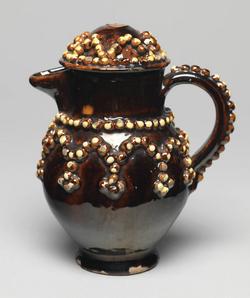 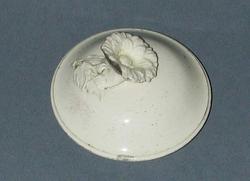 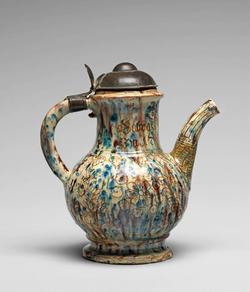