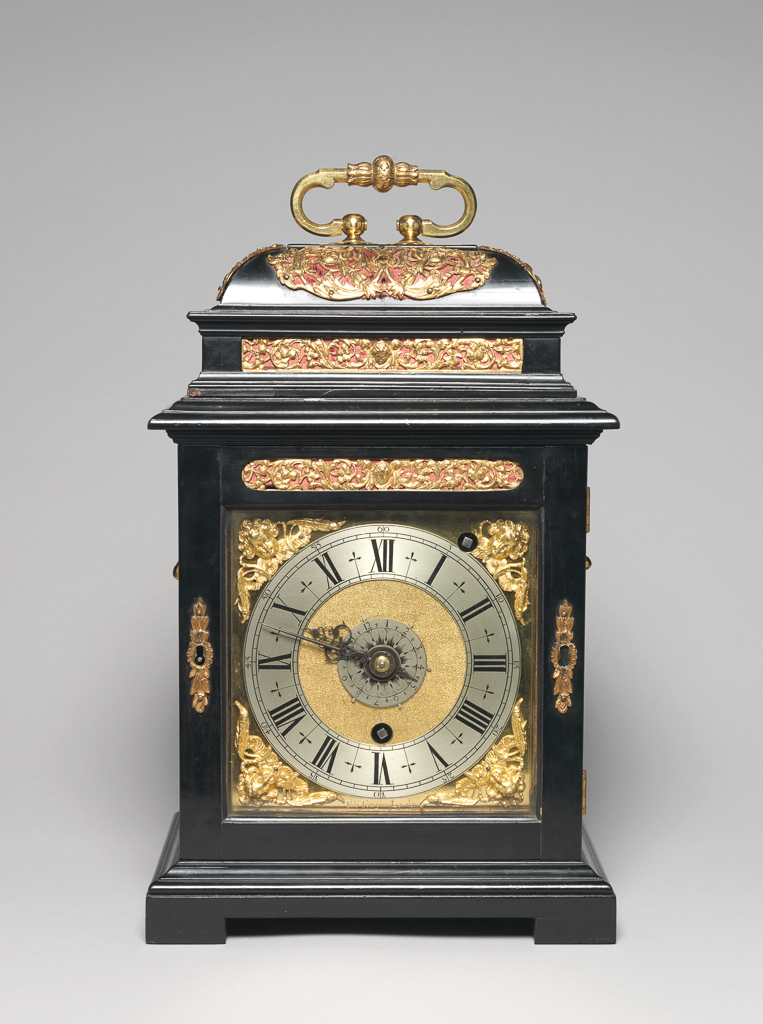 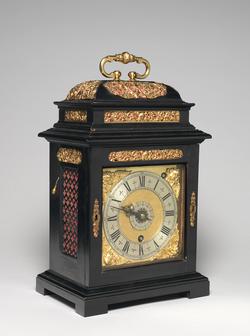 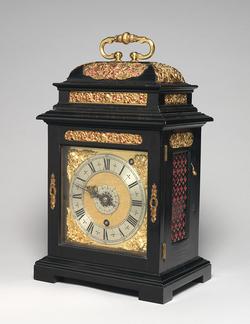 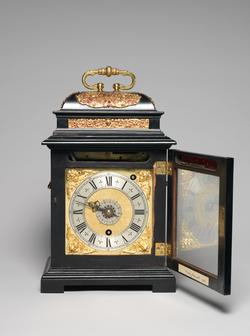 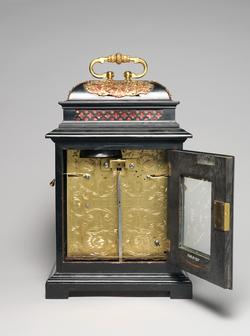 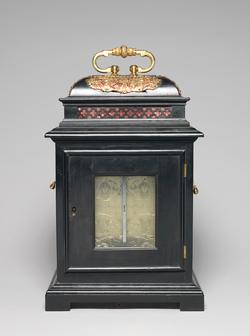 Dial: gilt dial plate 6 inches (15.2 cm) square, with matted centre and gilt cherub spandrels; silvered chapter ring with small 5 minute numbers outside the minute divisions, quarter hour divisions and typical Tompion half hour mark¬ings of cross formation; sil¬vered alarm setting disc behind the hour hand, stamped ‘4' and crudely inscribed ‘Vulliamy', on reverse; signed at base of dial ‘Tho. Tompion Lon¬don'. Winding squares, inside chapter ring at VI for going and outside chapter ring at I for alarm. Rear of dial has swivel latch at 10.30 to fit slot in case now broken away. Typical blued steel hands.

Movement: Eight day timepiece movement, with quarter repeating and alarm. Repeating now defective, vari¬ous parts removed and action modified to repeat hours only on small bell which was originally for quarters. Original verge escapement replaced with anchor and heavy Vulliamy-type pendulum, (was he responsible for the conversion?). It is interesting to note that Vuilliamy's day books record work carried out on two Tompion clocks of this type. On 31st December 1803 ‘Cleaned a Spring Silent Pull and Alarm name Tompion' for a Mrs Joy and on 31st May 1806 cleaned another `Silent Pull with Alarm' and repaired the case for a Mr Campbell. Back plate engraved with tulip design, signed ‘Tho Tompion Londini Fecit' just below centre; numbered 15 twice, in early position near top left hand corner and in later, standard position at centre of base.

Case: Oak veneered with ebony, which has had the dome section modified. The movement is so tall that it cannot be taken out of the case without hav¬ing removed the top section of the latter. This is now secured from inside by four long screws, the two front ones being almost inac¬cessible, but rebates in the body of the case indicate that the dome section was originally hinged at the front. The dome, which has a very unusual frieze section has been rebuilt and it is now difficult to say whether the frieze portion was part of the original design. It may have been required to accommodate the hour bell and other repeating parts now removed. The present screwed and glued block feet are not original and a brass plate with threaded hole which is fixed to the centre of the case bottom presumably indicates that there was originally a turntable base. The carrying handle, dome mounts and escutcheons of gilt brass appear to be original but the frieze frets in both body and dome could be later. There are 19th cen¬tury brass grilles in the side windows and upper rear opening.

Tompion started numbering his clocks c.1680 and the number of this example (15) indicates that it was produced within a year or two of that date. 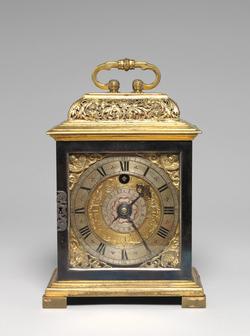 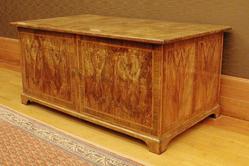 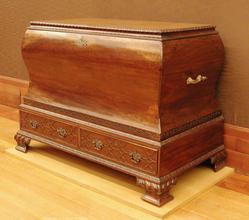 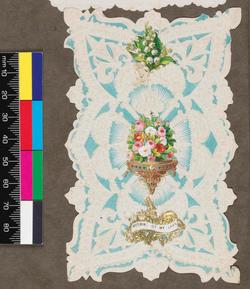