The extent to which foreign powers appeared to be able to intervene in nineteenth-century China without effective opposition from the Imperial dynasty led to considerable resentment among the population. In 1897 Germany, Russia, Britain and France seized four Chinese ports on various pretexts and this, with more local situations providing flashpoints, sparked off a military uprising by a resistance group called the Society of Righteous and Harmonious Fists, known in the West as Boxers. Starting in 1898 foreigners and Christian Chinese were subjected to increasingly brutal persecution by the Boxers, whom the Imperial Government, in the hands of the Dowager Empress Cixi, were now supporting as useful tools to remove foreign powers from China. It took the Western powers some time to assemble a coalition force strong enough (mostly Japanese, but with contingents from Russia, Britain, France, the USA, Germany, Italy and Austro-Hungary as well as some Chinese) to relieve the foreign population of Beijing and finally suppress the rebellion.
Until coalition forces could reach Beijing, such foreigners in the city as were able found refuge in the compound set aside by the Imperial government for the legations of Britain, France, Belgium, the Netherlands, the United States, Russia and Japan. These were strong buildings, intended to keep the legations on a tight rein; they also proved to be admirably defensible, and a highly international scratch force of 18 officers and 389 men held the Legations complex against the Boxer siege for nearly two months. Among them was Private G. T. Jones, of the Royal Marines Light Infantry. His medal is one of only 82 issued with this bar, and Jones was one of 16 of them who received it direct from King Edward VII, as the Naval and Military Record reported:
"The Royal Naval Barracks, Keyham, was the scene of a very interesting and imposing ceremony on Saturday, at noon, when his Majesty King Edward VII presented 280 China and 60 South African medals, and other decorations, to officers, petty officers and men of the Royal Navy....
"The distribution of medals by the King was at once proceeded with, Capt. Fortescue, equerry, handing the medals to his Majesty, and Lieut. Preston, R. N., reading out the list of recipients as they approached in single file. The medals were handed to them in cardboard boxes, each recipient saluting his Majesty with his left hand and receiving his medal in his right."
From King Edward's hand to Private Jones's and eventually to Lester Watson's, who purchased the medal at some point before 1928.
The Museum is grateful for the assistance of Mr G. M. Stein in ascertaining the details of the award of this medal.

Inscription present: Collection of war trophies including a royal shield below palm tree 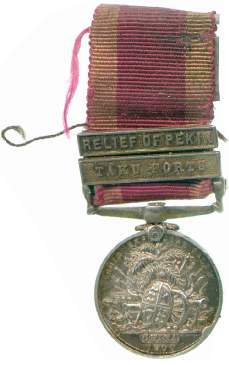 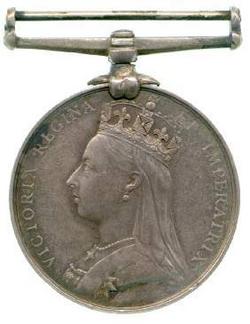 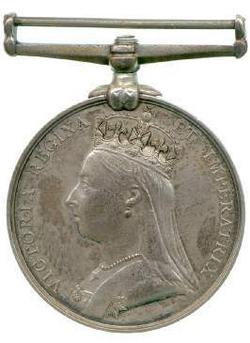 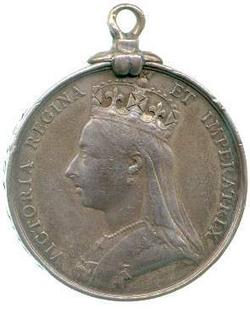