Just as in 1848 the extensive land campaigns of the Napoleonic Wars and the other conflicts of the pre-Victorian era were recognised by the issue of the Miltary General Service Medal, those serving in the Navy at the time were recognised with the Naval General Service Medal. As with the Army equivalent and the East India Company's related award, many of the battles for which the medal was awarded had been fought so long ago that few if any claimants survived.
In addition, bars were awarded for many actions whose significance and size were, despite the heroism displayed by those involved, relatively minor. The result was that many of the bars were issued in tiny numbers, with some combinations all but unique, and the medals command a very high price among collectors because of this rarity and individuality. This in turn, along with the manufacture in most cases of more bars than were eventually issued, has led to the `improvement' of many common awards where recipients' names are shared with those present at `rarer' battles. The medal also shares with the Military General Service and Army of India Medals the oddity that Queen Victoria, whose portrait they bear, was not the ruler under whom the battles for which it was awarded were fought.
Some of the smallest actions for which the NGSM was awarded were fought not from ships, but from ships' boats, combats which could on occasions be no less dangerous or destructive than ship-to-ship battles. Thus, on 1 November 1809, boats from 8 British warships were sent against a French convoy of five warships and seven merchant vessels in Rosas Bay, off the north-east coast of Spain, and achieved the destruction or capture of eleven of its number. This action earnt the first bar that this medal carries; the second was awarded for an assault by the Royal Marines on the French harbour of Morgiou, near Toulon, where they destroyed a battery while another party took over some laden merchant ships and sailed them out of the now-undefended harbour.
The medal was awarded to one of these Marines, Simon Davies. He fought in the first action from a boat of HMS Cumberland, and in the latter from one of HMS Voluntaire. His presence aboard the vessels at these times is verified, and the Medals Roll confirms the award of the piece to him, although it gives his name as `Davis'. Lester Watson purchased the medal from the London dealers Spink in 1926. 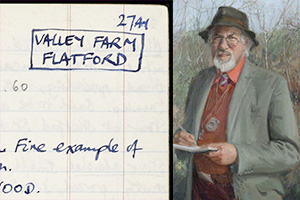