Colonial Canada's nineteenth-century history did not lack for secessionist movements, all ultimately unsucessful. In 1870 the Canadian Government began to organise settlement in the North-West Territory, and this was resented by the indigenous peoples, including the Métis groups from whom the revolutionary Louis Riel, involved in the earlier Red River rising, sprang. Riel returned from exile in the United States in 1884 and immediately began to agitate for recognition of Métis rights. In 1885, emboldened by lack of Government response, he set up a Provisional Government and proclaimed himself a divinely-chosen leader, and although general support eluded him numerous indigenous groups took the opportunity to rise on their own accounts.
A military response was swiftly forthcoming, and almost all of the Canadian Militia had to be committed to the campaign. Three battles, at the Saskatchewan River, Fish Creek and Batoche, more or less suppressed the various insurgents and the government was able to pacify the Indian discontents with pardons and food supplies. Riel was forced to surrender, and was tried and hanged. He is still regarded as a hero and national father in some Québecois quarters.
This medal bears no name or bar, and its suspension, of the type used for the Crimean War Medal, is not that used for the regular issue of this medal. It is possible therefore that this piece was a specimen or test version. Lester Watson acquired it at some point before 1928. 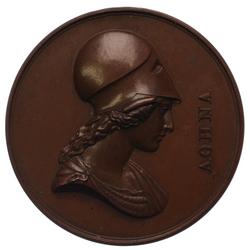