By 1895 it was beginning to be considered that the 23 bars issued to the India General Service Medal implied a need for its replacement, and in 1896 the new India Medal was first issued.
The North-West Frontier between British India and Afghanistan was a source of political tension for the length of the nineteenth century and beyond, as the precarious Imperial accommodations with local tribes required continual maintenance. In 1893 an agreement between the British in India and the rulers of Afghanistan instituted the Durand Line as a working frontier. This left many Pashtun tribal groups on the now-British side of the border, and the British found themselves unable to enforce any control over these unruly new subjects. In 1897 several parts of the Frontier rose in rebellion at once, all seeing an opportunity in a Pashtun rising which began the fighting.
This left many British garrisons isolated and defending themselves against heavy odds. No more desperate resistance can there have been than that of a 50-man Sikh garrison under one Indian officer who attempted to hold the signal post of Saragarhi against several thousand Orakazai and Afridi attackers. All were killed and their memory has now become legend, but for those who survived at other stations beyond the fort of Kohat during the attacks of August to October 1897 the bar for Samana 1897 was issued. The defenders of the fort of Shakbadar at the beginning of this period, the members of the Mohmand Field Force, which operated against the eponymous tribe from September to October 1897, and the Tirah Expeditionary Force which operated in that area of the frontier from October 1897 to April 1898, when a ceasefire was finally agreed, were instead awarded the bar for Punjab Frontier 1897-98.
This medal was awarded to Private M. Sullivan of the 2nd Battalion, Royal Irish Regiment. This unit was not part of either the Mohmand or the Tirah expeditions, which suggests that Sullivan fought in the defence of Shakbadar and was then moved out to a still-more-isolated garrison whose defence qualified him for the Samana bar. Lester Watson acquired the medal at some point before 1928.

Inscription present: British and Indian soldiers together holding a standard 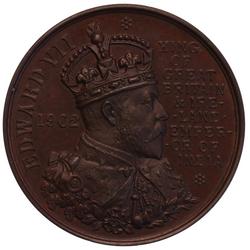