The British South Africa Company was established by Cecil Rhodes in an attempt to match the successes of the British East India Company from the base of the British Cape Colony (now South Africa) into the briefly-Portuguese territories to the north, an area soon known as Rhodesia. The Company, given a royal charter in 1889, recruited its own forces and from 1890 onwards significant engagements resulted in the award of this medal to those troops.
One of their opponents was Lobengula Kumalo, King of the Matabele, a Zulu people who had established a separate nation in the early nineteenth century. This nation became one of the BSAC's target territories and fear of the imminent colonisation led to attacks on Company territories in Bechuanaland (in the Cape Colony, now South Africa) in 1893 and Rhodesia (now Zimbabwe) in 1896, the latter joined by an uprising of the Mashona people, whose province now lies in Zimbabwe and had been annexed in 1890.
This medal was issued to those who had participated in the campaign in Rhodesia, but the bar it bears shows that the recipient, Gunner T. Allison of the 24th West Division, Royal Artillery, went on to assist in the quelling of the Mashonaland rising for which, otherwise, he would have received a separate medal. Lester Watson purchased this one at some point before 1928. 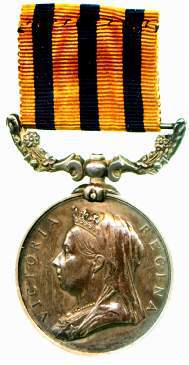 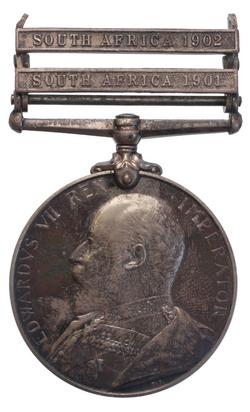