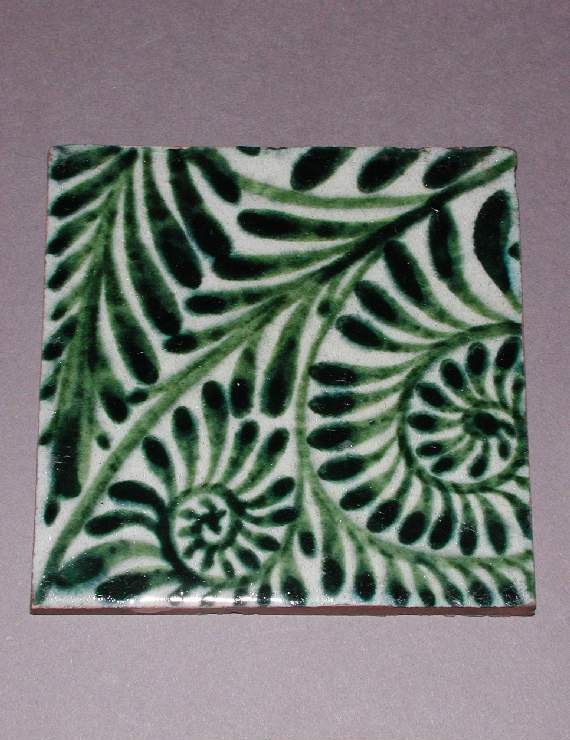 Buff earthenware tile, the top slip-coated, painted in dark green with a scrolling fern pattern and glazed. One stem forms a slightly curving diagonal; to the left are two fronds curled up like snails, to the right is a single straight frond. Each frond carries many small leaves, which are painted without outlines, the paint thickening at the tips. One edge of the tile is chamfered, and the tile thickens towards the other side. The back and sides are not glazed. There is no mark

This tile probably dates from around 1882-88, when De Morgan established his workshop at Merton Abbey, next door to Morris’s factory. But the design may be earlier : similar scrolling foliage is found on a ceramic jar produced by Morris in the early 1860s, which is thought to be designed by De Morgan. The tile is unusually small – De Morgan usually worked on 6x6 inch blanks (or sometimes 4-12 ins. – see Gaunt) – and the pattern appears to have been cut down from a four inch version, now in the V&A collection. However, the Fitzwilliam holds another, similarly coloured, three inch tile, which is marked ‘Merton Abbey’; possibly these were test pieces or samples. A similar four inch tile, also in green, is illustrated in a Morris & Co broadsheet offering ‘painted tiles for stoves, hearths, walls etc’; the tile price is two shillings. The design continues to appear on later tiles, often quartered with a flower, but in more stylised form. De Morgan made many, many designs for tiles and tile panels – some 820 are in the V&A collection.

Slip-coating : Earthenware, slip-coated, painted from a pricked design and glazed. 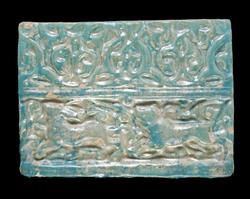