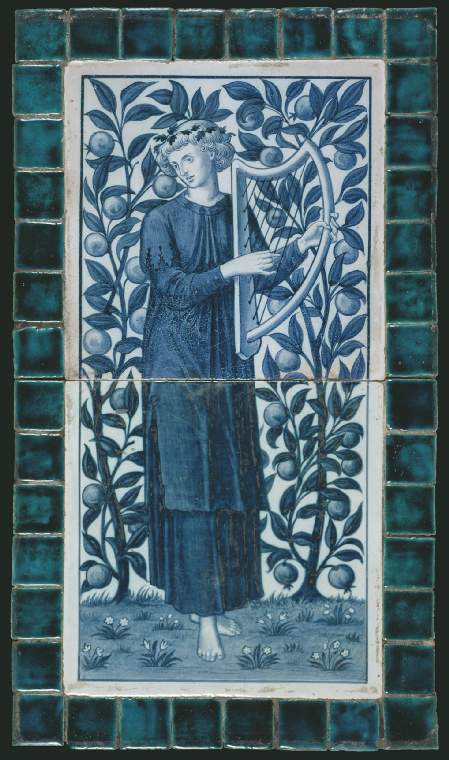 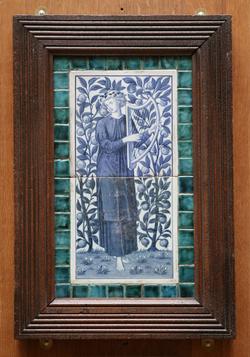 Tile panel in a reeded wooden frame. Two large squares tiles surrounded by a border of 40 small square tiles, mounted on glass. The border tiles are glazed in blueish-green, of varying depth. The central tiles are painted in shades of cobalt blue on a white ground, the design covering both tiles and surrounded by a thin blue framing line and reserved white border. A young minstrel in medieval dress stands, barefoot, playing a harp. Behind are two tall, stylised, bushes bearing circular fruits. The minstrel walks on grass, dotted with clumps of primrose-like flowers.

Given by the Friends of the Fitzwilliam Museum with a contribution from the Victoria & Albert Museum Grant-in-Aid.

Method of acquisition: Given (1980-02-04) by The Friends of the Fitzwilliam Museum

The minstrel is one of a series of twelve figures playing different instruments designed by William Morris, c.1867. They were produced in both tiles and stained glass, sometimes with the addition of wings, as angels. An early example is still in situ at Findon Church, Sussex, where this design appears with five other two panel minstrels above a number of floral tiles, 1867-8, three angels to each side of the altar (see Myers). A number of similar minstrel two-tile panels, decorated in blue, formed part of Morris & Co’s decoration of Novello & Co’s music shop, c.1870; and a window containing the Fitzwilliam minstrel design, set among square quarries of alternating stylised flowers,1872-74, is in the V&A collection (V&A C.679-1923). As noted by Myers, the colour of the Fitzwilliam tiles is a particularly rich blue, and the painting of the face not quite the same as the earlier versions, so this panel may be later, perhaps c.1900. It is likely that the border tiles were made by William De Morgan, and it is possible that the background also borrowed from his ‘leaf and berry’ design. 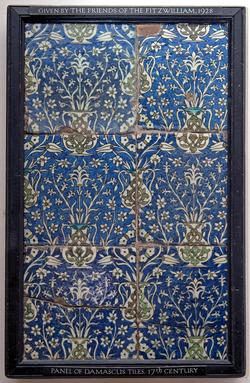 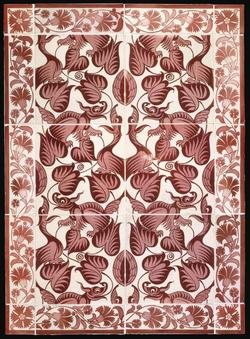 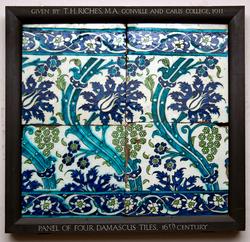 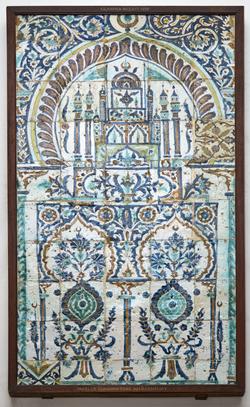