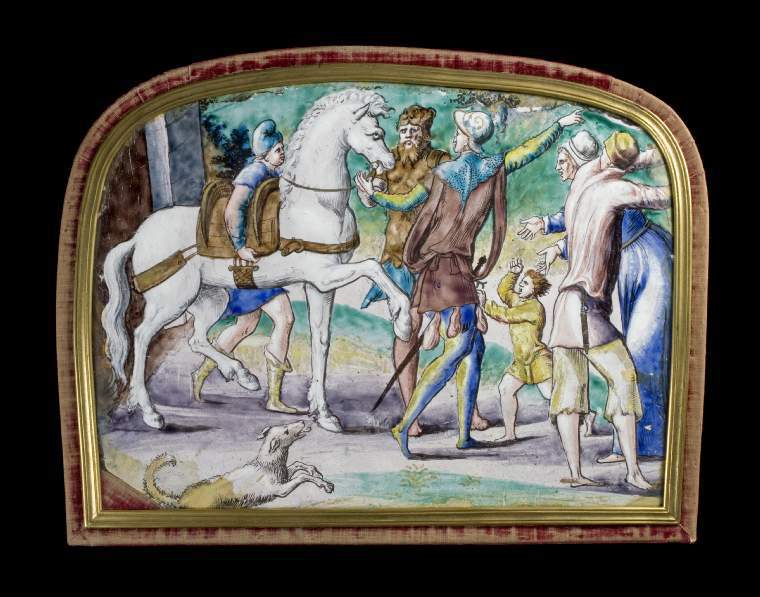 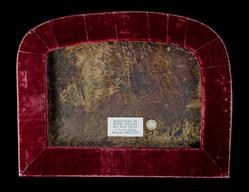 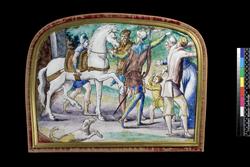 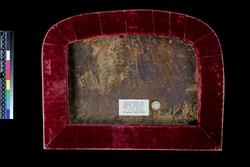 Copper plaque with a white ground, painted in enamels with a horse, two men, an old woman, a boy, and a dog

Slightly convex D-shaped copper plaque, painted in blue, turquoise, green, yellow, pale mulberry, pale purple, brown, black, and white enamel on a white ground. Clear counter-enamel with dark brown spots and mottled brown areas. On the left a saddled white horse stands in profile to the right. A youth wearing a turquoise phrygian cap, a blue tunic, and yellow boots stands behind the horse, and has his right arm over the saddle. Two men stand by the horse’s head holding its bridle. One, perhaps Hercules? wears a brown lion’s mask, a brown tunic, and turquoise skirt . The other who has his back to the viewer, points with his right arm towards the right. He wears a turquoise helmet al antica with feather, a brown tunic with a triangular turquoise collar over a garment with blue, green and yellow sleeves, and blue and yellow tights. He has a sword, and three brown bags are suspended from beneath his tunic. An angry small boy wearing a yellow tunic runs from the right towards the horses, shaking his fist. An old woman wearing a blue dress and white cap stands behind him gesticulating. In front of her in the foreground, another man, perhaps a peasant, has his back to the viewer, and holds out both his arms out towards the left. He wears a yellow hat, a pink tunic, and ragged calf-length breeches, and has a knife in a brown sheath suspended from his waist. In the left foreground, a white dog runs towards the figures. The ground is painted with areas of pale purple and green, and there are two yellow plants in the foreground. Gold is used sparingly on the edge of the woman’s cap, for the pattern on the sheath of the knife of the man standing in front of her, on the helmet and its feather on the other man, and on the edges of the horse’s equipment. The plaque is mounted in a D-shaped wooden frame. covered in red velvet, with a gilt-metal inner edge on the front. The frame covers the edges of the plaque at the back.

This plaque was attributed to Leonard Limosin and dated about 1570 by J.C. Robinson in 1862, and in the Magniac sale catalogue of 1892, where the composition was described as ‘animated even dramatic, and the execution, though verging on coarseness is bold and spiritied; it is painted in colours on a white ground, peculiar to Leonard in his later time.’ Dalton, 1912, was more cautious, remarking that it ‘appears to be by someone influenced by his style’. However, Philippe Verdier when he visited the Fitzwilliam, supported the earlier attribution to Léonard Limousin.

Inscription present: circular paper label printed in black with ‘.MAGNIAC• COLLECTION’ between concentric circles, and inscribed ‘247’ in black ink in the middle. 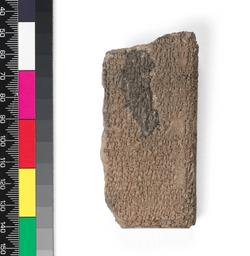 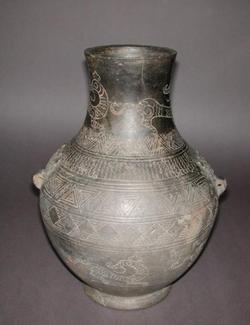 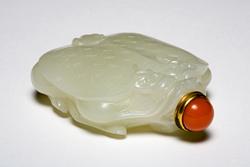 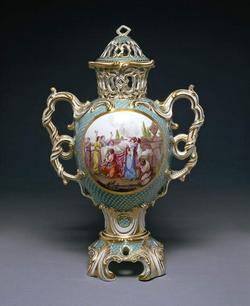