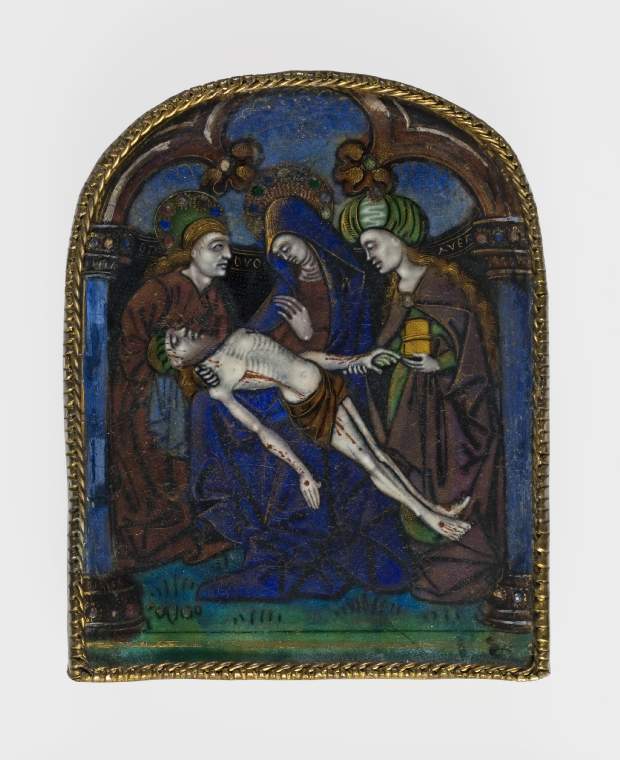 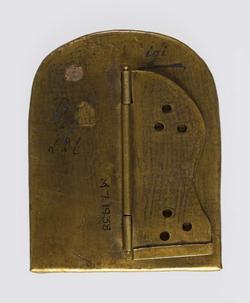 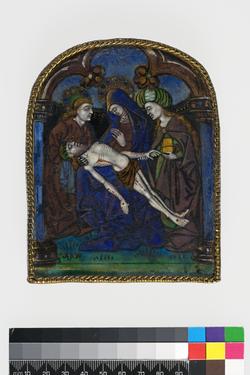 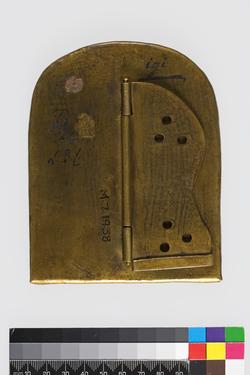 Maker: Master of the Orléans Triptych (Workshop of)

Rectangular, almost flat copper plaque with arched top, the white preparation enamelled in blue, green, yellow, brownish-mulbery, pale purple, a little red, black and white and gilded. The drawing appears black through the white preparation. The flesh is white over black with a pale mauve wash applied over parts of the faces and limbs.The circular jewels are foiled with presumed silver paillons. The surface is slightly rippled and almost mat.The counter-enamel is not visible.
The Virgin Mary is seated in the centre, looking down at the dead Christ who lies across her knees with his right arm hanging down, and his left extended but only partly visible. The Virgin’s right hand is raised, and she supports Christ’s right shoulder with her left hand. Christ’s left hand is held by Mary Magdalen, who stands on the right holding a jar of ointment in her right hand. St John stands on the left looking towards the others. Both he and the Magdalene are shown three-quarter view with their heads in profile.
Christ wears a green head band and a brown cloth round his loins. The Virgin has a mulbery halo with gold rays and eight alternately green and blue jewels. She wears a dark blue cloak over a mulbery gown. Mary Magdalene has waist-length pale brown and gold wavy hair, and wears a green turban-like cap, and a pale purple cloak over a green dress. St John has shoulder-length golden hair, and a green halo with six alternately mulberry and blue jewels. wears a mulberry gown and has a pale blue cloth over his right arm. All have white flesh shaded in grey.
Behind the figures is a niche with a trefoil arch rising from cylindrical columns with carved capitals and bases. The columns are blue and have three jewels on their capitals and two on their bases. The trefoil arch has a jewel on a trefoil on the two angles. The words ‘O(insert a large n) OVO AVER’ are inscribed in gold on the wall of the niche. The lower part is scattered with gold dots over a black ground. The area within the trefoil arch is blue.
The plaque is set into a gilt-metal frame with a wire rope edge on the front partly covered by teeth folded over from the back which hold it in place. The frame covers the reverse completely and has a vertically hinged prop, pierced by two groups of three holes. It is inscribed in black on the left B/55/L.D.C, and on the right 'igi' underlined, and lower down '615' on a tabula ansata with 'Ic.' (dot above I) above and below

Early 16th Century
Production date: circa AD 1500 : When acquired, the plaque was dated to c. 1480, but it probably dates from around 1500. Its authenticity has been doubted but the degree of damage to its edges suggests that it is probably genuine.

Plaques of this arched form were sometimes used as paxes, but few have retained their handle. Others were set into small free-standing frames, or were framed and hung at the head of the owner’s bed, as an image de chevet.

The composition is closely related to a Pietà in the Hermitage, St Petersburg, which has a similar iconography but with a tau Cross and landscape in the background, and was attributed to the Master of the Orleans Triptych by Marquet Vasselot. (see Documentation). It differs from the Fitzwilliam’s in three other iconographical details: the Magdelene has a jewelled halo, St John is shown three-quarter face instead of in profile, and there is a flower near the lower left corner. Another plaque in the Hermitage has analogous icongraphy and was alsoformerly attributed to the Master of the Orleans triptych. (see Documentation, Rappé and Boulkina, 2005). A plaque of this subject, presumably deriving from a shared source, but much more naively delineated, and with the group in a room with an ogee arch above is in the Louvre, OA 4011 (see Documentation, Baratte, 2000). All four plaques have a Mary Magdalene who wears a turban-like cap, fashionable in the mid to late 15th century, which distinguishes them from another series of plaques on which she it hatless and vaseless. She also appears in this way on the right wing of a triptych by the Master of the Orleans Triptych in the Hermitage (F 275), and in the Crucifixion forming the central panel of the triptych attributed to the workshop of Nardon Pénicaud at Bourges.

The unidentified enameller known as the Master of the Orléans Triptych was named by J.J. Marquet de Vasselot in 1921 after a triptych which had been given to the museum at Orléans in 1825.

Inscription present: possibly with a V in front of the first Ic. 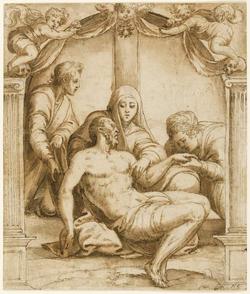 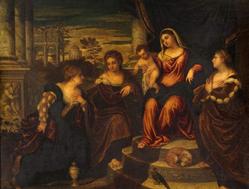 Virgin and Child with SS. Catharine, Mary Magdalene and Barbara 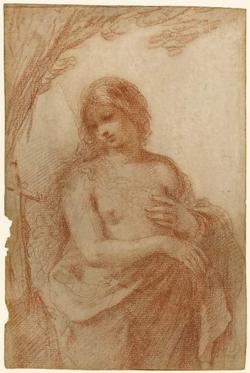 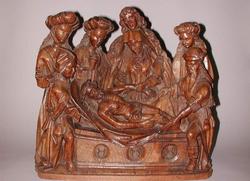