Buff stoneware with iron-speckled buff glaze, painted in iron-brown and greyish-blue with a styulized plant spray

Buff stoneware, thrown, with a handle applied at right angles to the lip, and iron-speckled buff glaze, painted in iron-brown and greyish-blue; base unglazed. The pot has a broad base and tapering sides, which widen just below the rim and lip. The tubular handle has a closed rounded end pierced by a hole. The front is decorated with an iron brown plant spray of two leaves and composite spire-like flower flanked on each side by two curved greyish-blue stems. There is a broad iron-brown band round the rim. Originally part of a set with C.48 & A-2007 and C.49-2007.

except base Glaze
Stoneware 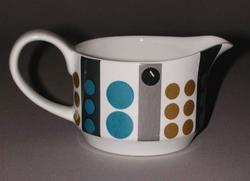 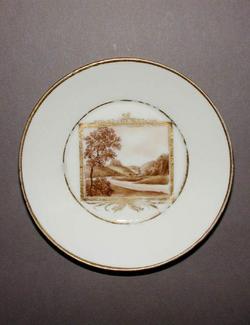 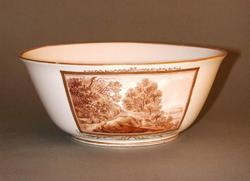 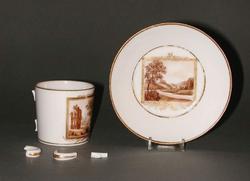