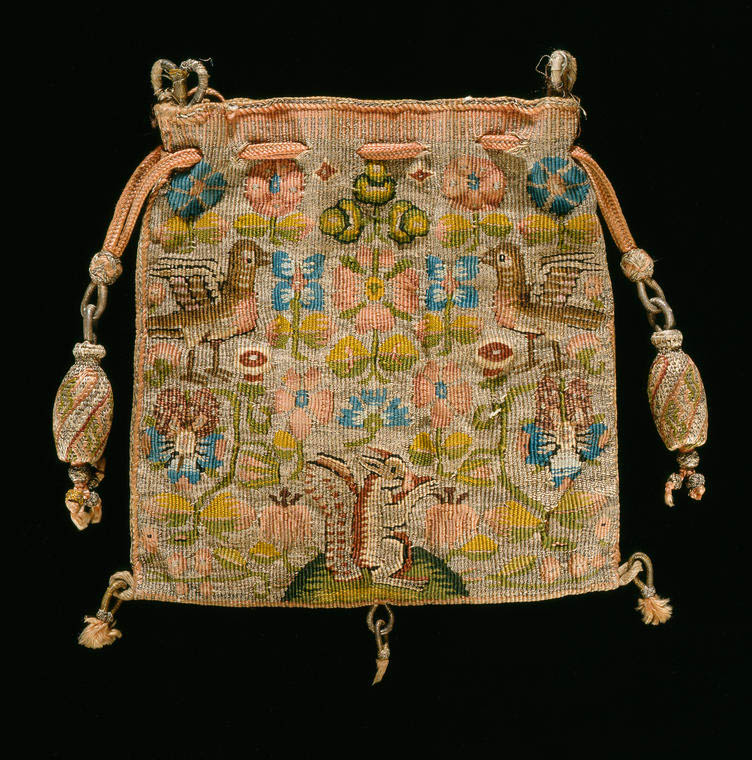 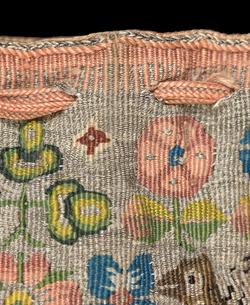 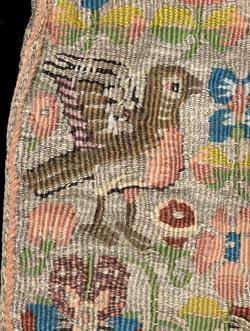 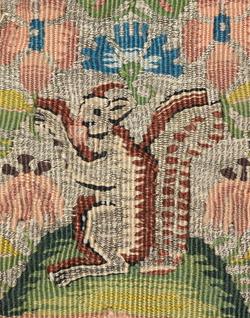 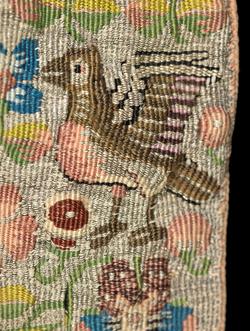 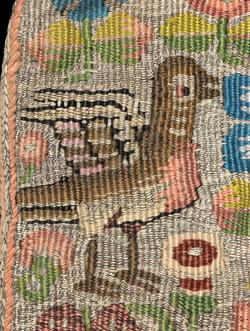 Purse, made from a single strip woven tapestry, sewn together along its selvedge for strength. The narrow galloon contains a single gilt thread and is used as a decorative finish to the purse's opening; it is woven in deep pink weft thread covering differing lengths of the warp. The purse has a double-drawstring, finished with tassels, a single hanging cord attached through loops at the tops corners and three other, smaller tassels dangled from loops at the centre and on the bottom corners of the purse.
The pattern is regular; at the bottom a squirrel sits between two trailing sprays of honeysuckle; slightly higher are two cinquefoil heads and two much smaller blossoms; above that two winged birds, perched above toadstools, stand guard over three unevenly sized flower heads placed between them. The top row consists of four flower heads worked in alternating colours and separated into two groups by a spray of acorns.
The same design was used on both sides apart from one element - the squirrel on its haunches is depicted slightly differently on each side.

There is no maker’s mark on this purse. They were not thought necessary for small items. We can only guess therefore where this purse was made by comparing its style and appearance with other small works. The heartlands of the tapestry industry in the 1500s was in modern-day Belgium, in the towns of Brussels, Oudenarde, Enghien and later, Antwerp. The inhabitants tended towards the new Protestant religion but because the area was ruled by the Catholic king of Spain there was constant warfare. This, together with the fact that there were too many weavers for all of them to find employment against a disrupted commercial background, meant that many emigrated – north to Holland and west and north into the German principalities and beyond. Others came to England, especially after 1560 following the accession of the Protestant Queen, Elizabeth I. The majority settled in London; others were invited by the town councils of Sandwich, Canterbury, Maidstone, Colchester and Norwich in the hope that new industries would revive the flagging local economies. The settlement of émigrés was encouraged by the English government, aware that England lacked skilled craftsmen in the luxury trades. Some noblemen tried to set up workshops for foreign workers, usually with the obligation that they should pass on their skills to the native-born. One such man was Worcestershire nobleman, William Sheldon, who set out a scheme in his Will that would provide capital sums as loans for trained weavers, English or foreign-born, to enable them to set up independently. He also allowed a man we know as Richard Hyckes to occupy the family’s manor house at Barcheston, Warwickshire, rent-free, as long as he organised the production of tapestry and woven cloth. How successful his plans were is unknown. Nothing is documented; there is no contract for any of the weavings now called Sheldon, nor do the workshop’s accounts survive. It was not until 1919 that a local antiquary claimed five tapestries, previously ignored, at nearby Chastleton House, as Barcheston work. Thereafter almost any tapestry without known origin or any tapestry with an English coat of arms became known as ‘Sheldon’ work, from Barcheston. But there was no solid explanation why this should be so. Although this purse was thought to have been made in Barcheston, there is no factual justification for this opinion. All the researchers of the 1920s – until recently the only studies of ‘Sheldon’ products – ignored the presence of émigré weavers in London. Barcheston was not the only place in England where tapestry was woven, as was previously thought. There is a strong possibility that the Fitzwilliam tapestries were woven in London where the émigré weavers established their workshops, and where there was a market.

This purse was a luxury object, woven with a high percentage of silk thread and an even higher silver thread count. The spray of acorns depicted symbolises, and acknowledges, the accumulation of wealth. When used, the warp threads remained vertical adding strength – and thus longevity – to a relatively frail object. The piece could have been woven on a very small loom, possibly even on an inkle loom. This purse is an all too rarely preserved woven fashion accessory, as opposed to the more commonly found embroidered examples. Its pattern can be compared to embroidered examples of similar date and, like the tapestry-covered Bible (T.45-1954) and the pair of tapestry-woven glove cuffs (T.145&A-1931) in the Victoria and Albert Museum, may well have been borrowed from needlework examples. Previously described as 'Sheldon' work, made in Barcheston, it is now thought that this purse was probably woven in London. 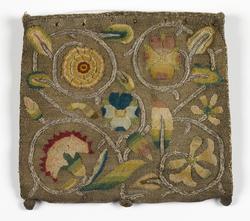 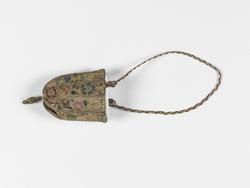 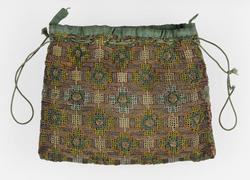 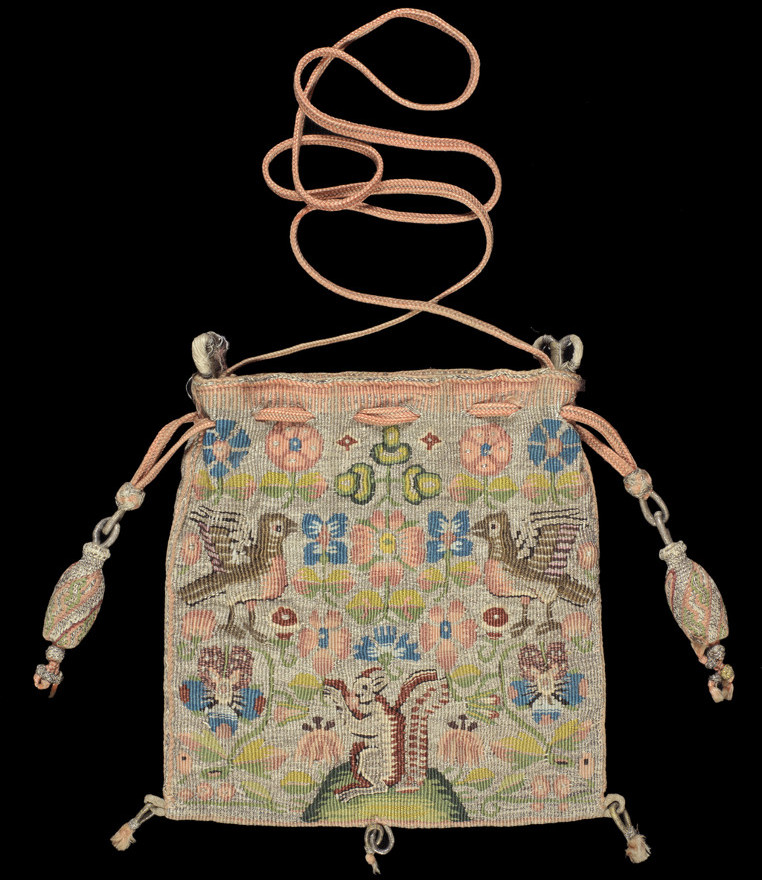 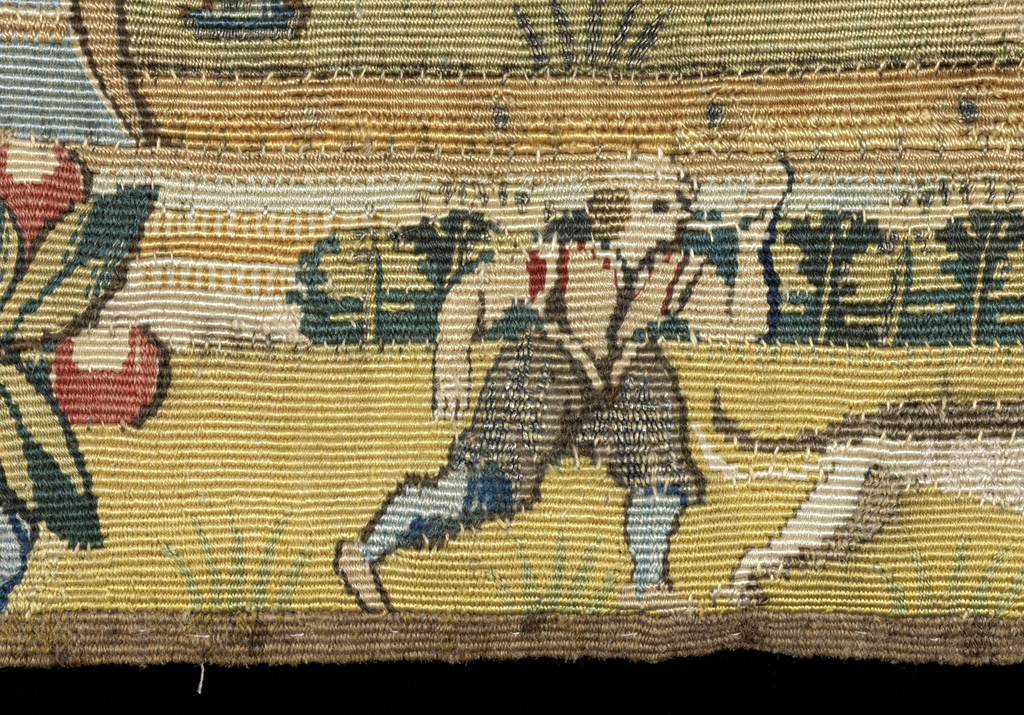