Earthenware slip-cast in one piece and glaze cream overall.A stylized fallow deer standing in profile to the viewer’s left, turning its head round to its left to lick its flank. The spaces between its leg are solid and filled by small bushes in relief.The base is a narrow straight-sided rectangle with slightly bowed sides on the front and back

Given by Clare Cambridge in memory of her parents

Method of acquisition: Given (2008) by Cambridge, Clare

John Rattenbury Skeaping, R.A. (1901 – 1980) was an English sculptor and equine painter. A leading figure in the move to ‘direct carving’, using the process of carving to suggest the final form, he was closely associated with Henry Moore, Richard Bedford and Barbara Hepworth (to whom he was married from 1925-1933).

Skeaping modelled fourteen animal figures for Wedgwood in 1926. Ten were made, from 1927. 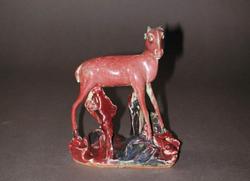 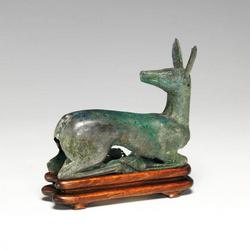 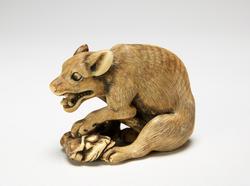 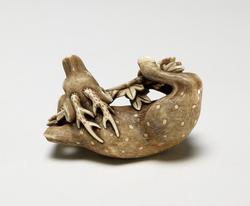 Oracle the Fifth: From the Head of a Horse

Oracle the First: From the Head of a Thracian

Oracle the Second: From the Head of a Demi-God