Silver-gilt; the oval bowl is attached by the prongs of a fork to an ornate hinged handle, decorated with applied masks, cherubs and a dragon, and terminating in a ball-shaped finial which unscrews.

Silver-gilt; the spoon's oval bowl is attached by two ornate cast loops on its back to a two-pronged fork. The base of the fork's handle is hinged and the folding mechanism held in place by a slide. The handle is cross-shaped in cross-section and has a ball-shaped finial, which unscrews to reveal a toothpick. The bowl of the spoon is finely prick-engraved with a pattern of stylised flowers and wrigglework. The loop at the back is ornately cast with scrolls with a grotesque mask between. On the rim of the bowl, where it meets the tines of the fork, are two applied cast scrolls. At the base of the fork are, in front, a mask of a man on a scallop shell, and on the back, a female term between two heads. The sides of the handle are engraved with bands of geometric scrolls and chevrons. The slide is formed from two bands of acanthus leaves with a raised hexagonal band between, which is set in the front with a green stone. There is a similar band set with a red stone further up the handle. The top of the handle has an applied cast dragon, which is held by chains to a cherub on either side of the handle. The back of the handle has an applied mask of a cherub. The ball-shaped finial is chased with bands of acanthus leaves and geometric decoration.

The combined spoon and fork bears the maker's mark of Friedrich Hillebrand of Nürnburg (flourished 1580-1608) but it is thought to be a late 19th or early 20th century copy. 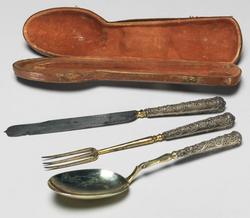 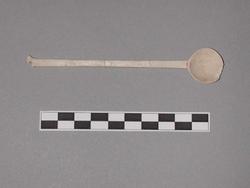