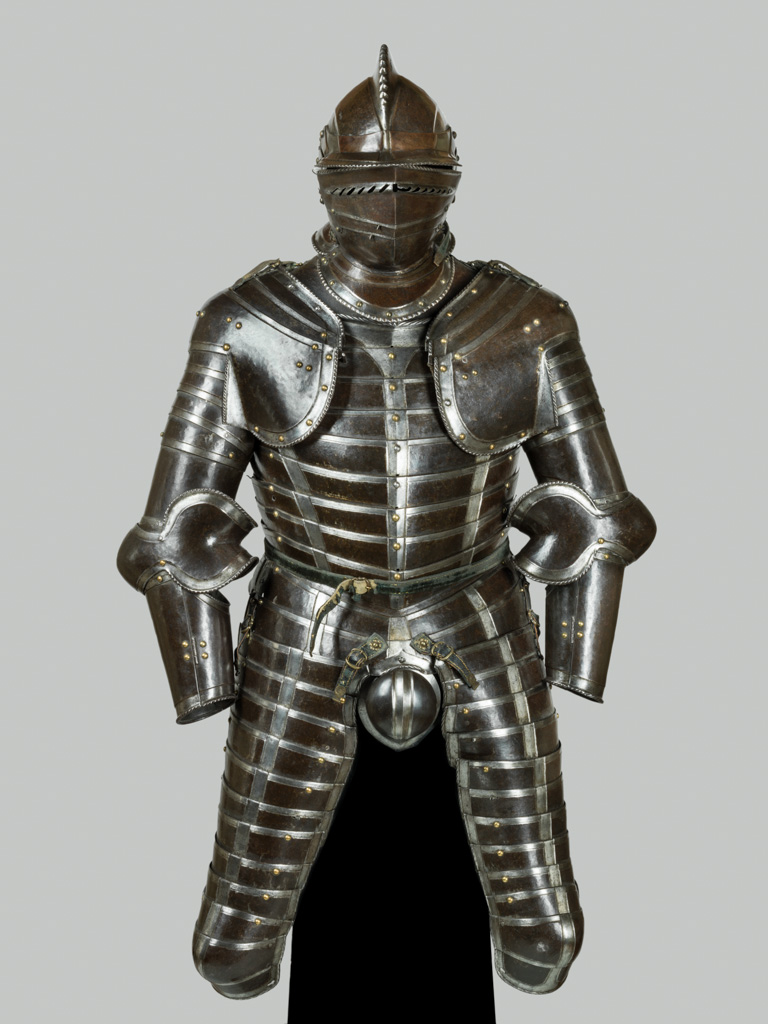 History note: According to information probably supplied by Sir James Mann, and recorded under Acc. No. M.2-1950 in the Department of Medieval, Renaissance & Modern Works accession register, the composite armour of which the present piece forms a part was successively in the collections of [Louis] Bachereau, [S.J.] Whawell, [Sir Edward] Barry and Colville. E.W. Stead's own manuscript catalogue confirms that the armour came from the Barry collection. Mrs E.W. Stead and Mr Gilbert Stead of Dalston Hall, Cumberland.

Given by Mrs E.W. Stead and Mr Gilbert Stead

The burgonet has a 'black from the hammer' finish, now partly oxidised to a russet colour with bright bands and borders showing pitting and medium patination. The buffe has been artificially coloured in modern times to match the burgonet, and its bright bands are similarly pitted and patinated.

The neck-guard and left cheek-piece of the burgonet are shown by differences in their workmanship and colour to be modern restorations. The peak is authentic but shown by its poor fit, its subtly different colour, the misalignment of its recessed bands with respect to those on the skull, and a plugged earlier pivot-hole on the left side of the skull to be associated. The buffe is shown by its different style, its roped upper edge and its different surface to be associated with the burgonet as well. The lowest gorget-plate of the buffe is shown by differences in its workmanship and colour to be a modern restoration.

Dish from the Pucci Service