'Spanish' morion, for infantry use, with etched decoration. Formed in one piece with an almond-shaped skull that curves down at each side and rises to a short, backward-directed 'stalk' at its apex; and an integral brim that is turned down at each side and curves up very slightly to a point at the front and rear. The edge of the brim has a file-roped inward turn accompanied by a narrow, recessed border. The border has been repaired with two internal patches at each side. One of the small rivets that formerly retained the rear patch on the left side is missing. The brim is severely cracked at that point, and shows a smaller crack at the corresponding point of the right side. The brim is pierced with a later wiring-hole at the centre of each side. The base of the crown is encircled by fourteen modern round-headed lining-rivets with external brass rosette washers and circular internal washers. The rivets at the right side retain a modern buff-leather lining-band. The central rivet at the right side also retains part of a modern buff-leather strap for connecting a missing cheek-piece. Attached at the nape by a pair of modern round-headed rivets with circular internal washers is a modern brass plume-holder decorated on its body with stamped acanthus foliage between vertical bands, and on its arms with stamped rosettes. The rivets occupy later holes pierced just above the original pair of holes for the plume-holder, which are now vacant.
The helmet is decorated on each side of the crown with three vertical bands of etched ornament that radiate from the apex, which is etched with a calix. All three bands are enclosed by a pair of narrower, plain bands. The ornament consists of trophies in the central bands, and stylised acanthus foliage in the front and rear bands, all on a stippled and blackened ground. The panels intervening between the bands are etched with scrolling tendrils running up a central, vertical line. The base of the crown is etched with five plain bands of which the central one is wider than the others. The brim is etched with stylised acanthus foliage on a stippled and blackened ground.

The helmet is bright with a light, slightly mottled patination. Its ornament shows some wear, particularly on the left of the crown.

Hammered : Formed in one piece with an almond-shaped skull that curves down at each side and rises to a short, backward-directed 'stalk' at its apex; and an integral brim that is turned down at each side and curves up very slightly to a point at the front and rear; hammered, shaped, riveted, with file-roped and etched decoration, and recessed borders on blackened ground, with a plume-holder with stamped decoration
Patinating
Forming 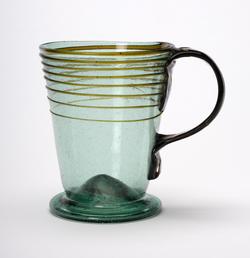