Sallet, with a movable visor, for heavy field use. Formed of a one-piece skull, a deep, pivoted visor and a laminated neck-defence. The skull has a broad, rounded crown, and extends downwards at the sides to just above the level of the shoulders where its edge has a plain, partial, inward turn. It has a broad, arched face-opening at the front, and an arched cut-out at the nape to receive the neck-defense. The base of the crown is encircled by nineteen lining-rivets, of which the central one at the front is missing. The rear eight, lacking their internal washers, are round-headed, while the remainder, which sit beneath the visor, are externally flush. A pair of lace-holes at the apex of the skull, two pairs at its rear, and a further pair at either side of the neck served to secure the lining. Those at either side of the neck are now filled by later round-headed rivets. At the bottom left corner of the face-opening is riveted a small, circular stud to engage a corresponding hole in the left of the visor. The visor is attached to the skull by a pair of riveted pivots with low, slightly rounded, radially-fluted heads and octagonal internal washers. The visor has short arms shaped around the pivots, a stepped, centrally-divided vision-slit, and is strongly embossed over the point of the chin where it is pierced with eight small ventilation-holes arranged as a triangular group of three at either side and a vertically aligned pair at the centre. It is embossed a short distance below the vision-slit with a pronounced, transverse ridge. The concave space between this ridge and the step of the vision-slit is pierced with six vertical ventilation-slots. The lower edge of the visor has a plain, partial inward turn, matching and continuing that of the skull. The same is true of the main edge of the neck-defence which is formed of four downward-overlapping lames connected to one another and the skull, respectively, by a round-headed rivet and internal washer at either side. The last lame is longer than the rest and has a rounded end.

The visor, pivots and neck defence are 19th century replacements, the last possibly made from genuine old lames. The skull has been repaired with ten riveted and welded internal patches. The helmet is bright with overall pitting.

This type of sallet evolved into the close helmet which was distinguished from the former by its possession of a separate bevor attached to the skull by the same pivots as the visor. 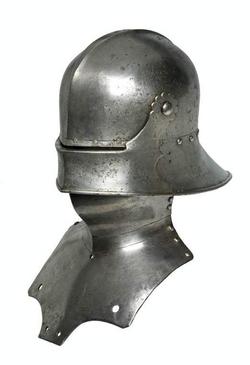