Cuirass, for a boy, with applied brass ornament, comprising a breastplate of great weight and a backplate. The medially-ridged breastplate is formed in one piece with a narrow flange at the waist. The arm-openings and the broad, shallow neck-opening have outward-flanged edges. Baluster-shaped studs of brass with domed roundels at their bases are attached at each side of the chest by means of integral split-pins. They serve to engage the shoulder-strap of the backplate. Flat, downturned belt-hooks are riveted at each side of the waist.
The backplate is formed of a main plate and a skirt of one lame. The main plate is slightly shaped to the shoulders. Riveted at each shoulder is a scaled shoulder-strap, pierced at its terminal with two keyhole-slots to engage the studs of the breastplate. The terminal scale of the left strap is restored, as is the underlying leather of both straps. Riveted at each side of the waist is a modern strap forming a waist-belt. The right strap terminates in a single-ended tongued iron buckle. The scales of the shoulder-straps and the buckle of the waist-belt retain traces of gold paint. Riveted at the right side of the main-plate is a threaded stud of uncertain function. The lower edge of the main-plate is flanged outwards to receive a skirt of one lame which is attached to it by three externally-flush rivets.
The main edges of the breastplate and backplate have plain inward turns, except at the neck-opening of the backplate which has been trimmed in modern times. The breastplate and the backplate are decorated around their neck-openings, their arm-openings and their waists with brass bands retained by split-pins of brass with large round heads. The band at the neck of the breastplate is V-shaped. The split-pins retain modern buff leather lining-bands. Those around the arm-openings are decorated with crimson velvet piccadils. The backplate and its skirt were at one time decorated with three raised bands in the 'black and white' fashion which have subsequently been hammered out. Those in the skirt appear to have been original, whereas those in the backplate appear to have been added in modern times.

The cuirass is black with extensive oxidation. The backplate originally possessed a 'black from the hammer' finish.

Hammered : The medially-ridge breastplate is formed in one-piece with a narrow flange at the waist; the backplate is formed of a main plate and a skirt of one lame; hammered, shaped, riveted, decorated with brass bands
Formed 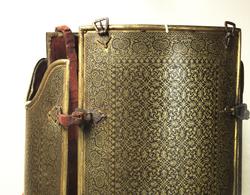 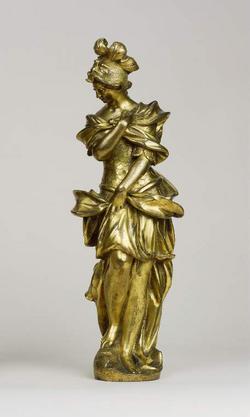 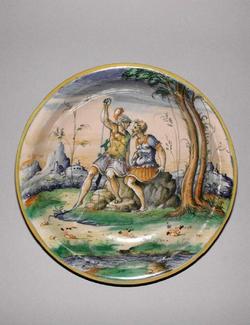 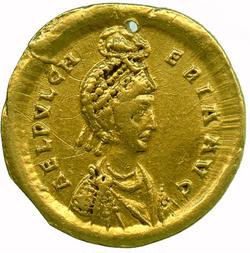