Gauntlet, for the right hand, of fingered form, for field use. Formed of a fairly short, flared, tubular cuff, a wrist-plate, five metacarpal-plates, a knuckle-plate, four scaled finger-defences and a scaled thumb-defence. The cuff is formed of an obtusely-pointed, medially-ridged outer plate and a considerably shorter inner plate. The latter is riveted within the former. The lower end of the knuckle-plate is shaped between the fingers. Attached by a leather hinge to the front end of the fifth metacarpal-plate is a thumb-defence formed of a medially-ridged, lozenge-shaped main plate four further scales, matching the finger-scales. The rounded ends of the final finger and thumb-scales are decorated with incised chevrons representing fingernails. The main edges of the cuff are decorated with plain inward turns.
The gauntlet has a 'black from the hammer' finish which has been polished away around the upper border of the cuff and in a medial band extending down the cuff to the bottom of the fifth metacarpal-plate, probably to make it match a black and white armour with which it was later associated. Probably part of the same composite armour as HEN.M.138-1933, HEN.M.139-1933 and HEN.M.144-1933.

The bright bands show a medium to heavy patination. The intervening blackened areas have been refreshed with black paint.

Hammered : Formed of a fairly short, flared, tubular cuff, a wrist-plate, five metacarpal-plates, a knuckle-plate, four scaled finger-defences and a scaled thumb-defence; hammered, shaped, riveted, with incised decoration on a bright and blackened ground in the 'black and white' fashion
Formed 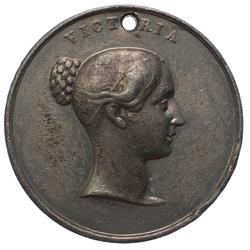