Shaffron, for heavy cavalry use. Formed of a main plate, a pair of ear-defences and a plume-holder. The main plate is strongly shaped to the horse's face and narrows towards its rounded lower end which curves forward very slightly. Except at its upper and lower ends, and at the level of the eyes, it is decorated with a medial ridge and a pair of lateral ridges that give it a boxed form. The sides of the main plate have large semi-circular cut-outs for the eyes. The edges of the eye-openings are strongly flanged outwards. They and the edges of the lower half of the main plate have plain, inward turns. The upper corners of the main plate are cut away in concave curves where they are fitted with tall, medially-ridged ear-defences that narrow to rounded, upper ends. The ear-defences have flanged lower edges that fit over the main-plate and are in each case attached to it by four round-headed rivets. The edges of the ear-defences have plain, inward turns. Each ear-defence is fitted mid-way up each side with a round-headed rivet that would have served to retain a loop that passed around the rear of the horse's ear. From its workmanship and the artificial character of its pitted surface, the left ear-defence can be recognised as a modern restoration. Pairs of rivets, probably serving to retain either side-plates or straps, are located at the lateral edges of the main plate between the ear-defences and the eye-openings. All except the lower rivet at the right edge are fitted with small, circular, internal washers retaining fragments of leather straps. Single rivets, serving to retain straps, are located at the lateral edges of the main plate, mid-way down its lower half. The rivet at the right edge is once again fitted with a small, circular, internal washer retaining a fragment of a leather strap. A series of eleven round-headed lining-rivets with small, circular, internal washers runs down each side of the main plate just within its lateral ridges and the eye-openings. The second from top rivet on the left side is missing, and a total of seven of the remaining rivets lack their washers. Several of the rivets retain fragments of a leather lining-band beneath their washers. Attached by four later, round-headed rivets between the upper ends of the eye-openings is a large plume-holder of rectangular form with deep semi-circular cut-outs at each side, and concave cut-outs at each corner. It is embossed medially with a broad, rounded rib, the hollowed underside of which accommodated the base of the plume. Two pairs of holes pierced above the plume-holder, at the brow, probably served to lace up the plumes. The right side of the lower half of the main plate shows a conspicuous dent that appears to represent the proof-mark of a bullet.

The shaffron is bright with a medium to heavy patination overall. Its surface is heavily scored through harsh mechanical cleaning.

This very large shaffron protected the horses head and ears. The plate in the middle is a plume holder into which a decoration of some kind was held – a spray of ostrich feathers was very commonly used. 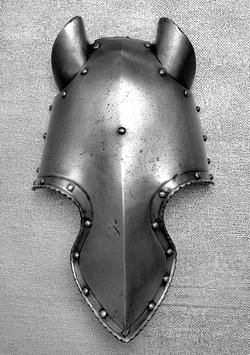