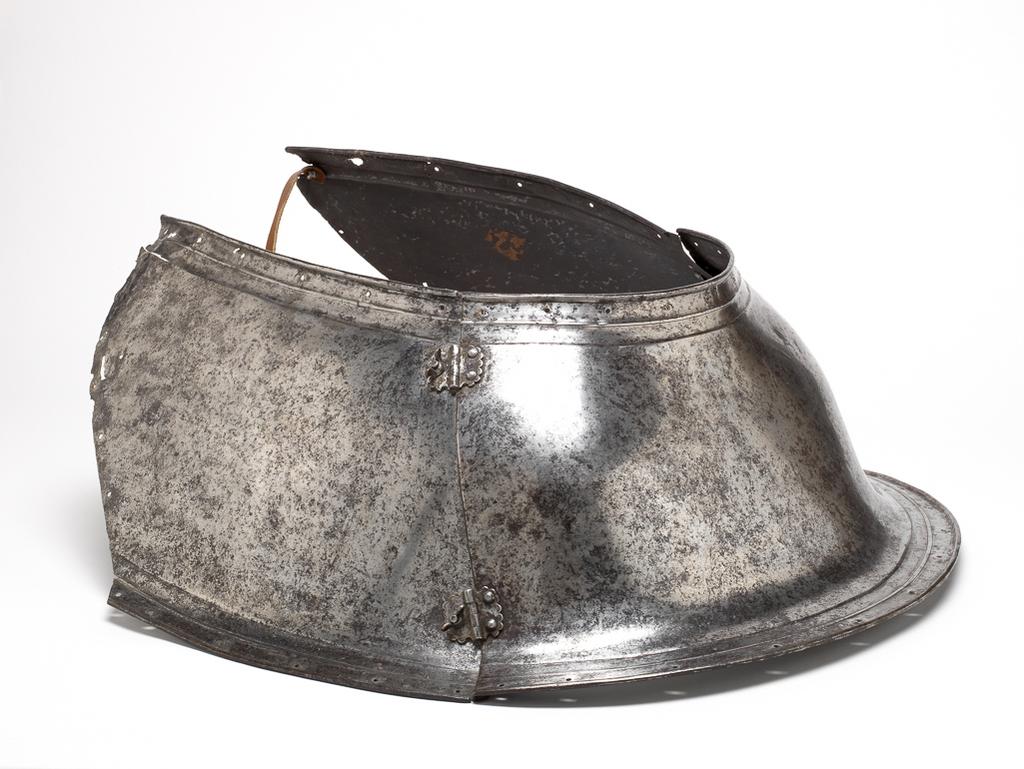 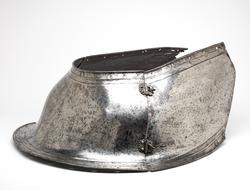 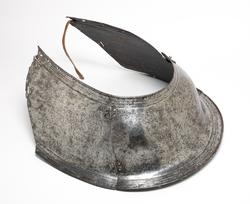 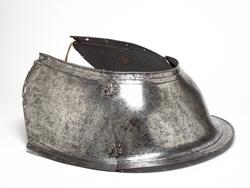 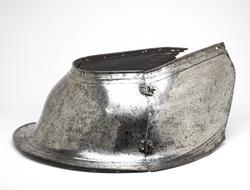 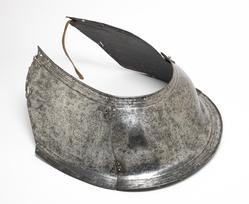 Peytral, for heavy cavalry use. Formed of a central plate and a pair of side-plates. The upper and lower edges of all three plates have plain inward turns accompanied by double recessed borders. The main plate is of trapezoidal form, widening towards its lower edge which is strongly flanged outwards. It is curved around and shaped to the horse's chest. Its upper and lower edges are bordered by nine and eleven holes, respectively, for missing lining-rivets. The side-plates fit within the lateral edges of the main-plate and are connected to them by pairs of hinges. The hinges have semi-circular cut-outs at the sides and slightly rounded ends which are in each case scalloped with seven lobes, decorated at their edges with punched semi-circles. The front end of each hinge is attached to the central plate by a pair of modern, vertically-aligned, round-headed rivets. The rear end is pierced with a hole which engages a threaded stud that protrudes through the side-plate from a round-ended, vertical bar that is attached within the latter by a pair of externally-flush rivets. The hinge is secured to the threaded stud by a modern wing-nut. Each side-plate, which is slightly curved in both the horizontal and vertical planes, has a slightly concave upper edge and a slightly convex lower edge. The latter is flanged outwards, more markedly at the front than the rear, as a continuation of the lower edge of the central plate. The front edge of the side-plate slopes upwards and rearwards very slightly to a cropped upper corner. The rear edge slopes upwards and rearwards more markedly in its lower two-thirds, curving upwards to become vertical in their upper thirds. The rear edge is cut near its centre with a vertical slot and, behind the slot, a rivet hole for the attachment of a strap that connected the peytral to the saddle. The slot in the right side-plate is placed somewhat higher than that in the left plate. The rear edge of each side-plate is pierced at its upper and lower ends with construction-holes that align, respectively, with the upper of the pair of rivets that secure the upper hinge to the central plate, and the lower of the pair of rivets that secure the lower hinge to the central plate. The upper edge of the left side-plate is bordered by five holes for lining-rivets, while the upper edge of the right is bordered by six. The rear hole in each case has broken out. The lower edge of both side-plates are bordered by six-holes for lining-rivets. The rear edge of the left side-plate is bordered by three holes for lining-rivets, while the rear edge of the right was originally bordered by six, of which the top one is broken out. A later hole is pierced at the upper-rear corner of each side-plate for the attachment of a strap to suspend the crinet around the horse's neck. The upper rear corner of the left side-plate is slightly damaged, while the upper rear corner of the right is more severely damaged and split along the lower edge of the decorative upper border.

History note: According to H.W. Harding (1929) and H. Stöcklein (1930), much of the armour at Niecswiez had been obtained as booty from the armoury of the Teutonic at Königsberg at the end of the 17th century. From the armoury of the Princes Radziwill, Castle of Niescwiez, Poland. To save the armoury from the Bolshevist uprising, the Lithuanian family of Radziwill moved it to their town house in Warsaw. According to the London dealers Fenton and Furmage, the collection was acquired by the Austrian Jewish dealers Pollak and Windonitz just before the First World War. Some pieces were sold in Germany, but most were offered for sale at Christies, London, on 29 June 1926 and 14 June 1927 as the armoury of a 'Russian Prince'. A total of fifteen peytrals of the series to which the present example belongs were sold in those two sales, namely lots 16, 23, 54, 66, 87, 105 and 117 in the 1926 sale, and lots 9, 14, 23, 27, 68, 71 and 76 in the 1927 sales. The present peytral is recorded in the manuscript catalogue of E.W. Stead as having been lot 76 in the latter sale. This lot is recorded as having been purchased by Fenton and Son. Mrs E.W. Stead and Mr Gilbert Stead of Dalston Hall, Cumberland

Purchased with funds from the Leverton Harris Trust.

Other peytrals from the series to which the present example belongs can be recorded in the Royal Armouries Museum, Leeds, the Glasgow Museum and Art Gallery, and the Metropolitan Museum of Art, New York.

The left side-plate is associated with the other two plates but derives from the same series of pieces.

The peytral is bright with a mottled medium to heavy patination.

Hammered : Formed of a central plate and a pair of side-plates; hammered, shaped, riveted, with double recessed borders on all three plates
Patinating
Formed