Hand-and-a-half sword or bastard sword. (Type XVII). Large well-formed pommel in the shape of a truncated wedge, rounded at the top where it is cut into ridges, two on each side of the tang-rivet, set at right-angles to the plane of the blade. The tang-rivet button is in the form of a small stepped pyramid. The main faces are faintly ridged, vertically, and the edges are strongly chamfered. Stout tang of flat rectangular section, stamped on one side with a well-marked Gothic capital letter B. Cross of quadrangular section slightly arched from the thickened midpoint, deeply slotted on the underside to take the shoulders of the blade, the slot being considerably wider than the blade itself. Blade, long and acutely tapering, of flattened hexagonal section, lightly fullered in the upper third. There is a mark (a sword or dagger) inlaid in latten upon either face of the blade, 5.7 cm (2 1/4") below the hilt.
Found on the bed of the Great Ouse at Ely, Cambridgeshire, 1845. On the back of the blade is a legend in white paint stating, incorrectly, that it was taken from the River Cam at Ely. This is a mistake, which has been perpetuated ever since in every literary reference to it.

Given by the Friends of the Fitzwilliam Museum, with a contribution from the National Art Collections Fund

Method of acquisition: Given (1934-07-30) by The Friends of the Fitzwilliam Museum

This sword has a long grip so that it can be wielded with one hand or, for extra power, with two hands, giving rise to the name hand-and-a half sword. The blade tapers down to a point and is quite thick making it useful for piercing attack as well as slashing. The blade is stamped with an armourer’s mark of a dagger inlaid in copper alloy, the tang stamped with the letter B in Lombardic script. Traditionally this sword is said to have been found in the bed of the river Cam at Ely in 1845, although the river at Ely is the Great Ouse.

While there are very many examples of this type (XVII) of sword, only a few survive with hilts - i.e. pommel and cross - of the same exact form as this. The most notable are two swords taken in the 19th century from the graves of two knights, Frederiks von Tarant and Friedrich von Griffenstein, in the Abbey church of Königsfeld in Aarau, Switzerland. These knights fell in the battle of Sempach (1386) and were buried in the nearby Abbey. The sword on Von Tarant has a very similar mark on the blade, except that there are two swords side-by-side and an added cross fourche. Another rather small example is in the collection of Mr R.T. Gwynn of Epsom, Surrey. There is a similar one, with a shorter grip, in the Odescachi Collection in Rome.

Casting (process) : Sword, cast and inlaid with brass in the fuller 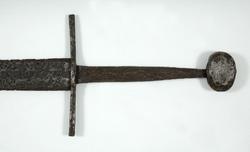