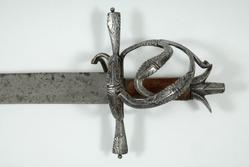 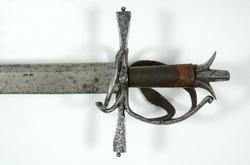 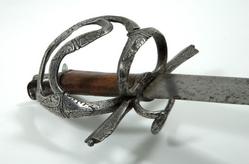 Short sword. Pommel in the form of a crown of three fleusons, the middle on a long truncated cone accommodating the top of the long, which is switched over without a button. Half-basket guard of four elements of flat triangular section. Knuckle-guard turned over at the top, loop-guard, covering the back of the hand, springing from the top of the knuckle-guard and meeting the midpoint of a forward ring-guard. Between these two guards is an S-shaped counter-guard. Straight quillons of the same flat triangular section as the guards. The quillons widen toward the tips, which are cut off straight and finished with small spherical knobs. Back-guard of one bar, springing from the root of the outside quillon and joining the end of a single short outside branch. The grip is of oval section, widening toward the pommel, covered in red-brown leather, very much worn. Broad back-edged blade, with a shallow fuller just inside the back edge which ends in a short cusp at the point. The back is very slightly curved. The blade bears its stamped mark of the City of Basle.

The form of the guards of this sword is typically South German of the second quarter of the 16th century, but the pommel is as distinctively Venetian while its blade bears the mark of Basle. It seems that such marks stamped upon blades do not refer to its place of origin of the blade, but of the hilt in which it is mounted. Therefore it seems to be reasonable to assume that this sword is, basically, Swiss, though it has the appearance of a hybrid. A particularly fine sword with a similar guard is in Rome, in the Odescalchi Collection, Mu. no. 185. This is illustrated in Nolfo di Carpegna's catalogue of its collection, and in Boccia and Coelho's 'Nemi Bianche Italiane', no. 381. A sword with an almost identical pommel and similar guards was sold by the Galerie Helbing in Madrid in 1908, from which sale some of the Medieval swords in the Fitzwilliam Collection came.