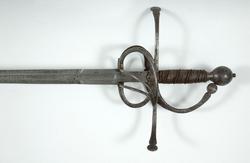 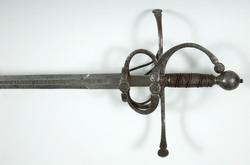 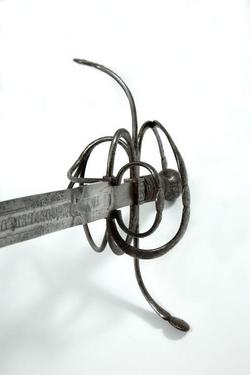 Sword (Reitschwert). Very large hilt, but with a rather small ovoid pommel with an insignificant button; long grip bound with steel wire, with a twist of thicker twisted wire. Turks' heads at top and bottom (this is probably the original binding). Knuckle-guard of flat ribbon section, ending in a flat disc against a pommel. A loop-guard springs from the midpoint of the knuckle-guard to cross the back of the hand and end at the rear of the base of the rear branch. Branches of the same section as the other guards. This loop-guard has incorporated at its midpoint, directly along the ecusson, a flat disc to match the others. A small ring-guard joins the lower ends of the two handles; this also has a disc at its midpoint. Very long wide-spreading quillons horizontally recurved, also of flat ribbon section, widening toward its tips which are twisted with disc terminals. Back-guards of three elements.
The hilt is of bright steel, decorated with applied silver classical heads in profile upon the disca with a large fleur-de-lis on each face of the strongly cusped ecusson, which has a squared ridge along each edge.
Long, flat blade, broad and slightly tapering with a strong ricasso with flat faces. There is a wide shallow fuller at the forte of the blade, below the ricasso. The ricasso is contained within the arms of the hilt, but there is a short secondary ricasso below this. The blade is earlier than the hilt, and would to be from a bastard sword of the mid-sixteenth century, which has been adapted and remounted in a seventeenth century hilt. In the fuller the words TOLEDO, CARLOS LEI VUN are engraved in large Roman capitals (Charles I of Spain, the Emperor Charles V).
Norman, type 53. Pommel, type 18.