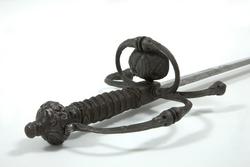 Sword. Hilt of blackened steel; cushion-shaped pommel, with a very tall button, rather crudely chiselled with a band of fleur-de-lis of alternating plain and twisted wire of varying thickness, with eight bands of thicker twisted wire. Turks' heads at top and bottom. Knuckle-guard of diamond section, chiselled into a lightly reeded pattern with large opposed acanthus elements at midpoint, the top screwed into the side of the pommel. Quillons of the same section arched towards the blade, the rear one bent inwards, finished with elaborated and delicately fashioned little acanthus loops, en suite with the decoration of the knuckle-guard. Large ring-guard on the outside of the hilt, with opposed acanthus elements at midpoint to match those on the knuckle-guard. There is a large rectangular quillon-block, from which, inside the ring on the outside of the hilt, springs a small shall-guard whose edge is scalloped in the middle, half of which is repeated on each side leaving the next of the surface reeded like the rest of the hilt.
The pommel, though of the right shape, is clearly of a totally different style and quality of decoration from the rest of the hilt, though it does appear to be contemporary association. Blade of vague flat diamond section, engraved at the forte with a panel containing: a laurel wreath, below which is an oval cartouche within an impression; a smiling feminine face enclosed by a riband containing the legend 'NEC PLURIBUS IMPAR'. Below this is a second panel with a laurel wreath against a black background (?), below which is an engraved fleur-de-lis. The reverse of the blade is engraved with similar panels, but they are merely outlined and not filled in.
Norman hilt type 108 (variant).

This is a handsome, though clumsy sword, very difficult to handle. It must have needed a glove to prevent the harsh wire of the grip from actually cutting the hand.