Colourless lead-glass, blown, and moulded. The lower part of the narrow bell-shaped bowl is spirally ribbed, and is supported by a small extra gather and a five-knopped stem rising from a conical foot with a folded rim. 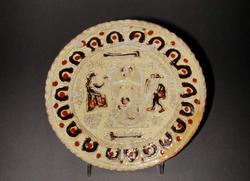