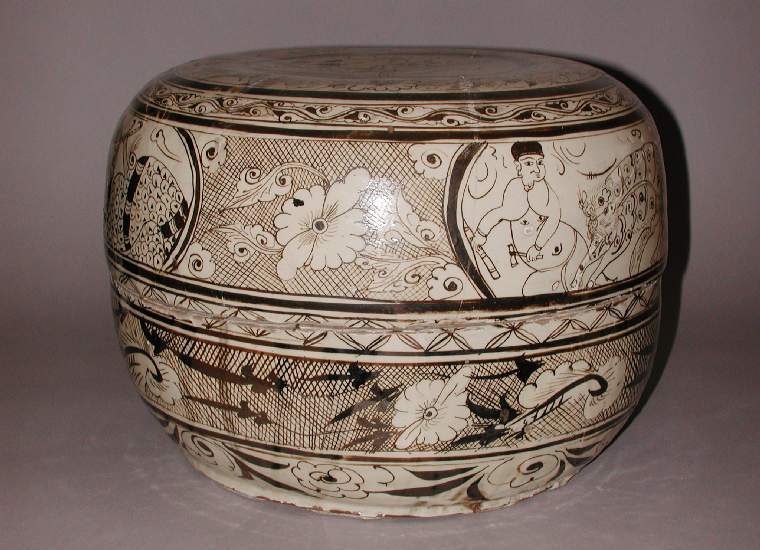 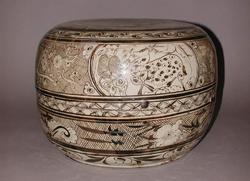 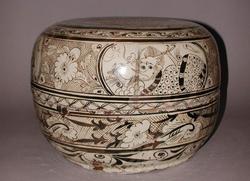 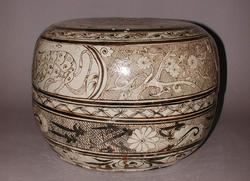 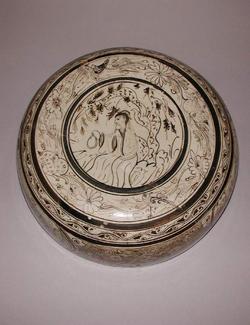 Domed cylindrical box and cover. Orange stoneware, thrown, covered in white slip, and painted in iron-black under clear glaze. The cover with rounded shoulders and slightly concave top fits over the rim of the body. The body has nearly vertical sides, and a low, slightly flaring foot and recessed, flat base. The correct positioning of the cover on the body is indicated by three small applied buttons like rivets near the rim of each (one on the cover and two on the base). The decoration over all is in iron-black on white slip. The cover depicts a sage holding a ring sitting under a tree within a lined circle, and surrounded by a border of rabbits, birds and flowers, within wide and narrow lines. The sides of the cover are decorated with three panels within a border of wide and narrow lines: one showing a boy with a deer, the second a mythical beast and the third a boy holding a hammer and piece of bamboo, and a lion. The panels in between are decorated with flowers and foliage, and tree and foliage with cross-hatched ground. The base is decorated with three bands: the narrow top band with lozenge shapes; the centre band with various flowers and leaves on cross-hatched ground; and the lower band with white flowers, with dark centres and leaves.