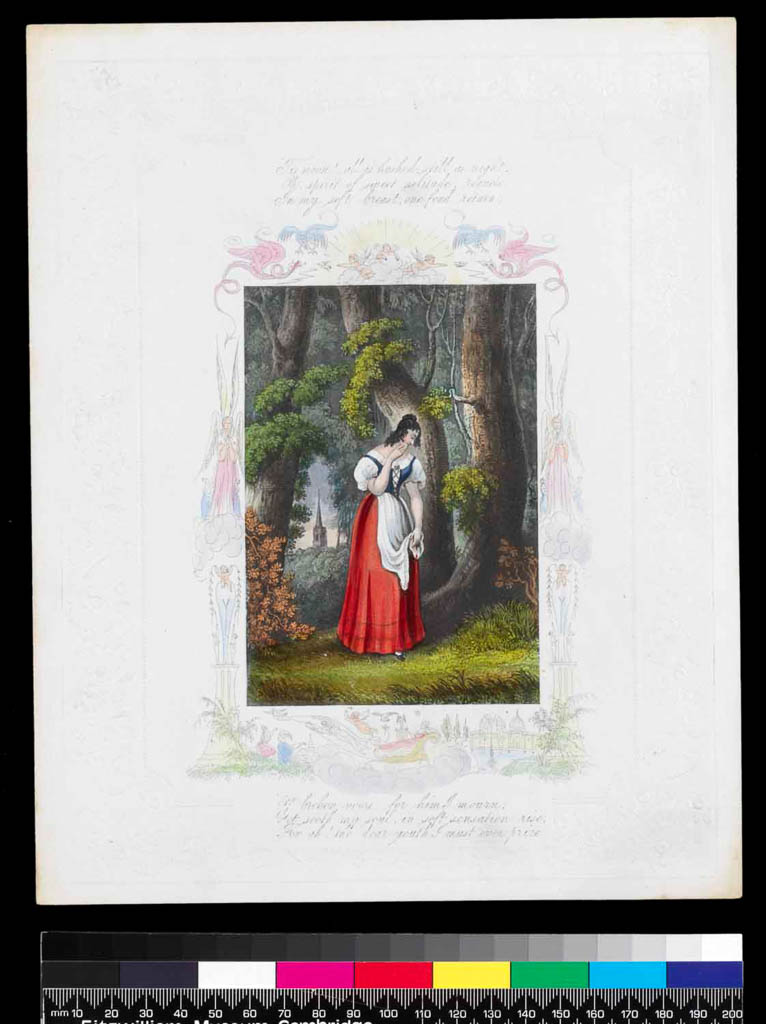 Aquatint and etching with hand-colouring on 4to-sized embossed white wove paper. From 'The Despondent Lover' (or 'The Unrequited Love') series. The border is lightly embossed with a design of leaves and flowers with gaps at upper and lower centre where the etched lines of verse are positioned: "'Tis noon, all is hushed, still as night / Oh, spirit of sweet solitude requite / In my soft breast, one fond return / Of broken vows - for him I mourn; / Yet sooth my soul, in soft sensation rise / For ah!, the dear youth I must ever prize." An inner etched border with hand-colouring of a design featuring winged angels and fantastical birds surrounds the central panel, which shows a young woman standing beside a large tree in a wooded clearing, her right hand raised to her face in a despondant attitude, a church steeple seen in the background. The Museum of London holds an example of this number from the series: 34.170/721. The inside pages are blank. Frank Staff says of the series: 'The central picture of each shows a delightful aquatint, beautifully coloured and finished by hand. Although some of the scenes depict young ladies in grief, and one shows a jilted lover, not all of them are unhappy. ... The set numbers fourteen in all, which was recognised as the regular "valentine dozen".' The series was originally published in the 1830s, it is presumed, by Joseph Addenbrooke. However, according to Frank Staff: 'It has been noted that a set of this series is known on paper watermarked '1828', with Addenbrooke's name imprinted. Some time later, it seems likely that the plates came into someone else's possession, who filed off Addenbrooke's name from them and reprinted the entire series on un-watermarked paper. This could explain the plentiful supply still available and the comparatively worn state of the embossing on some copies.' See, Frank Staff, _The Valentine & Its Origins_, Lutterworth Press, London, 1969, figure 64, p. 60 and pp. 62-3. The Glaisher examples are on un-watermarked paper and without a maker's stamp and are most likely later reprints. The Museum of London holds examples of these prints, which are later reprints made by Jonathan King and they date them circa 1870-1885. 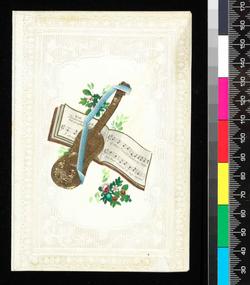 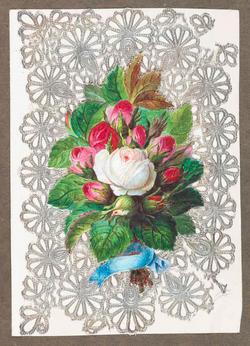 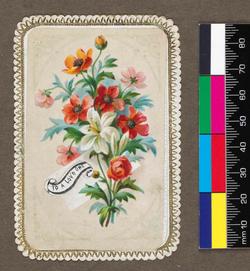 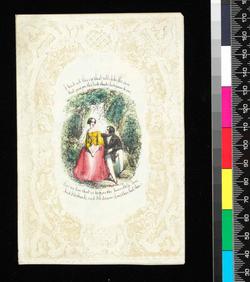