Bone-china sugar bowl in ‘Vogue’ shape. Circular bowl of inverted cone shape with straight sides and flaring, raised foot. Decorated inside the rim with ‘Sunray’ pattern, a stylised Art Deco design of black sun with yellow surrounding glow and fawn rays, and on the outside with a small fawn and black only version. A black band outside a thinner yellow band runs round the remaining inside rim and the outside of the foot.

History note: Given by the Friends of the Fitzwilliam Museum with a contribution from the Decorative Arts Society Purchase Fund

Part of a coffee service made by Shelley Pottery, Staffordshire. Joseph Shelley joined Wileman & Co. at the Foley Works, Fenton, in 1872. Under his son Percy, the trade name ‘Shelley’ was used from c.1910. Incorporated as Shelley Potteries Ltd in 1929, the business continued to produce bone china useful and decorative wares until 1966, when it was taken over by Allied English Potteries.

The set comprises coffee pot with lid, sugar bowl, cream jug, two cups with saucers, two side plates and one cake plate. Vogue shape was designed by Eric Slater, Shelley’s Art Director, and produced from 1930 until around 1933, with many different patterns; ‘Sunray’ is pattern number 11742. The factory mark was in use from 1925-45. 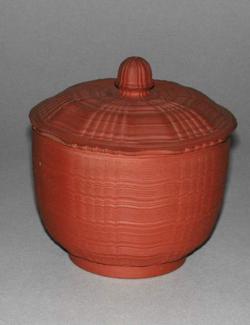 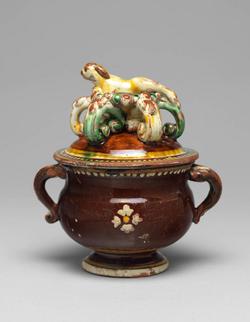 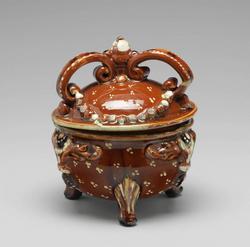 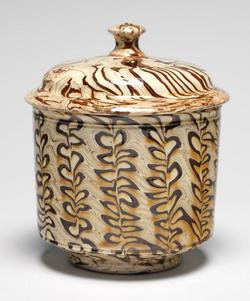