White earthenware, transfer printed in blue under a pearlware glaze and decorated with pink lustre.

Ovoid jug with slightly projecting foot-rim, slightly concave neck, projecting lip, and angular loop handle. Body decorated with a continuous under-glaze blue image of a hunting scene, starting from the handle, of three hounds, a man dismounted from his horse and an upturned dead stag on a grassy ground, framed by tree trunks to either side and scrolling branches above. The neck is decorated with an underglaze-blue image of leaves and flowers and the handle with a vertical band of lines and stylised leaves. Pink lustre has been applied to suggest a pink ground which frames the major parts of the imagery, with a solid band of pink lustre around the base and inside the neck. The interior is clear-glazed. The underside is slightly recessed and flat, with an incised circle towards the centre, and glazed.

English lustreware was commercially produced from c.1805 and popular in the first half of the 19th Century. Minute amounts of gold were used to produce copper, gold, pink or purple lustre, depending on the type of clay, lustre formula, number of layers and firing temperature; platinum was used to mimic silver. Most lustreware was made for everyday use, and factory markings are rare.

The huntsman design perhaps comes from a print by George Morland (1763-1804).

This jug was finished by painting a resist mask (perhaps a sugar and glycerine mix) over the design, before coating with lustre - which only adhered to the unpainted parts. Swansea, Staffordshire and Leeds were the main production centres for resist lustreware. Combining under-glaze blue decoration with lustre is unusual, although a silver lustre jug with the same huntsman scene is known. 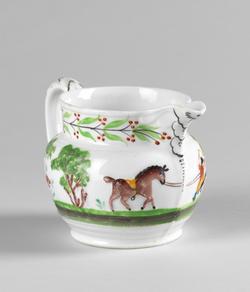 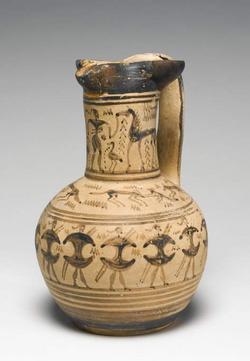 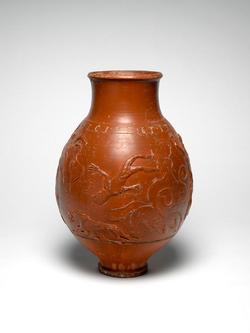 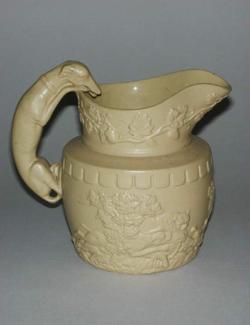