Edition 106/120. A hardbacked portfolio (670mm x 470mm) with a tan-coloured cloth spine and outer edges and paper-covered boards of cream, black and tan, the front board with a geometric border design and central band containing 'BRANGWYN' in elongated, stylised lettering. '106' written on the front board in pencil at lower right. The interior boards are covered in a textured, handmade paper of undulating leaf and stem design printed in blue-green ink. A short length of brown satin ribbon used for tying the boards together found inside and the remains within opening in front board.

Frank Brangwyn, His Work 1921-1922', volume 1, published by E. F. D'Alignan and P. Turpin, Paris, 1927; a portfolio of Brangwyn's works, reproduced by various methods in colour (and reduced in size from the originals), comprising 41 photomechanical reproductions after unpublished drawings, watercolours and prints and 9 original prints (6 etchings, 2 lithographs, 1 aquatint; this latter is counted by Horner as a lithograph). The mounts of the original prints are signed by Brangwyn in pencil. With accompanying essay in French printed on large sheets (610mm x 915mm), 'L'Art de Frank Brangwyn' by Théophile Alexandre Steinlen, dated 'Paris, Avril 1923' and featuring four lithographed portrait sketches by Steinlen of Brangwyn printed in sepia ink. The essay is enclosed in a cover sheet with a title page featuring an aquatinted plate with publisher's details printed in the lower margin and with Brangwyn's signature written in pencil below. The image features a vine-covered monument 'carved' with the name 'Frank Brangwyn', a small crowd of disposessed people below and a bridge seen in distance from which a figure is falling. The edition no. '106/120' is written in pen and ink at lower right. An additional sheet insert lists the plates (I - L; 'List of Illustrations: Frank Brangwyn 1922'), with a headpiece illustration which is a detail from Brangwyn's woodcut, _The Storm_ (original, British Museum, 1943,1211.466). With additional letterpress doublepage English translation of Steinlen's essay and the list of plates printed on a smaller sheet. The Brangwyn Portfolio (2 vols) was formulated by Brangwyn as a way of making his art accessible to a wider audience and to meet a demand for high-quality reproductions of his art. The Portfolio comprised Brangwyn's own selection of 100 of his works on paper (prints, drawings and watercolours) which he felt was collectively representative of his output. The selection included 12 original etchings, 2 original lithographs and 1 aquatint. Drawings, watercolours and pastels were the focus of the remaining 85 works which were reproduced by a photomechanical processes, including collotype, to which Brangwyn and his assistants then used stencils to add pastel or watercolour, lending the reproductions something of the finish of the original works. The first volume contains works numbered 1-50 (I - L) and the second numbered 51-100 (LI - C). It was produced in a limited edition of 120 at a price of 100 guineas for the two-volume set with three additional copies produced for presentation which were numbered in Roman figures: I. II. III., each containing one original drawing and a series of etchings and wood cuts on Japanese paper. 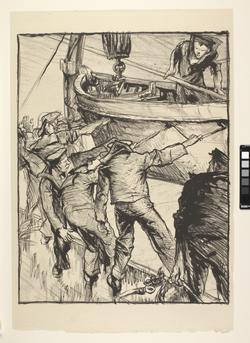 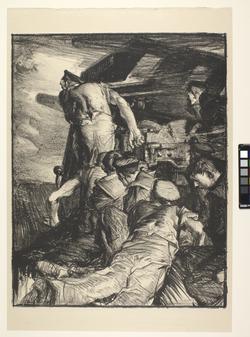 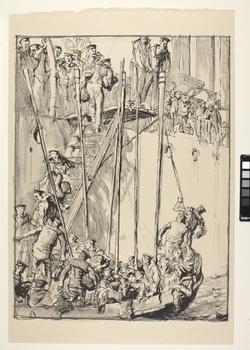 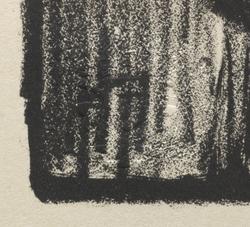