After a portrait by Sir Peter Lely (1618-1680), (c.1675, location of the original portrait by Lely is unknown, but many copies and variants exist, including the portrait after Lely by an unknown artist in the collection of the National Portrait Gallery, NPG 153). Life-sized head and shoulders portrait of Charles II as King, facing right, looking out at the spectator, within a decorative oval frame of laurel leaves bound with ribbon and studded with pearls. He wears an armoured breast plate over a richly embroidered doublet, a lace cravat and wig.

History note: (?); Collection des Fürsten zu Oettingen-Wallerstein in Meitingen; sale, Leipzig, C. G. Boerner, 28 May 1935 (25), Reichsmark 110 to Alfred Strölin; from whom bought by John Charrington and given to the Fitzwilliam Museum, c.1935. Charrington's handwritten documentation relating to the sale gives the price code as: '£RO', which probably represents £50.00. Charrington probably brought the print into the Fitzwilliam collection fairly soon after the sale date at the end of May, 1935.

Method of acquisition: Given (1935) by Charrington, John

Mezzotint (686 x 518 mm). Proof with open letters and artists' names in engraved italics in the spandrels at upper left and right: 'P. Lelÿ. Pinxit.'; 'A. Blooteling. fe. et. ex.'. The sitter’s name given below the engraved frame in open Roman capital letters reserved in white: 'CAROLVS II DEI GRATIA ANGLIÆ SCOTIÆ FRANCIÆ ET HIBERNIÆ REX.'. Thread margins. Watermark of Strasbourg lily on a shield surmounted by a crown with horns and three-leaved clovers, downward extension with '4' and initials, 'WR'; a countermark of the Jesuit symbol, 'IHS' incorporating a cross at the centre of the 'H' and with a pendant 'AI'. (See Notes) Mark of the Princes of Oettingen-Wallerstein on verso (L.2715a). Inscribed in graphite on verso: '1?5 ?RM'. Nick Stogdon has recently identified VI states, this being II with open letters. Other impressions of the open letter state II are at the Ashmolean Museum, Oxford (Sutherland Collection; Lar. Vol. 1, fol. 45) and in the Royal Collection (RCIN 602538). Chaloner Smith only mentions the plate in his note to Blooteling's portrait of James, Duke of Monmouth, where he observes that 'one of the states of the Charles II' has 'the "privilege" of Holland' (Stogdon's state VI). It is one of three, large-scale mezzotints executed by Blooteling which form a series of Royal portraits after Lely, the other two being a portrait of Charles II's son, James Scott, Duke of Monmouth (Hollstein 186; P.123-1937) and his brother, James II, as Duke of York (Hollstein 171; P.11358-R). The scale of these mezzotint portraits and the similarity of the portrait of Charles II to Peter Vandrebanc's engraving of the King made in 1675 after a portrait of by Henri Gascar has led to these three large mezzotints being linked to a joint venture between Lely and Blooteling, which is thought was possibly instigated by Lely as a challenge to Gascar (See Griffiths, 1998 and Royal Collection online catalogue entry). Vandrebanc's engraved portrait of the King after Lely which he produced in the following year, 1676, is exactly identical in size and facial features to Blooteling's mezzotint (which is undated), and both are comparable to a drawing also in the Royal Collection (RCIN 912839). This drawing, which is squared for transfer, was previously attributed to Vandrebanc but is now attributed to Blooteling on the strength of its closer correspondence with Blooteling's mezzotint, thus implying that Blooteling's mezzotint preceded Vandrebanc's engraving. For discussion of the three mezzotints by Blooteling see especially Antony Griffiths, The Print in Stuart Britain 1603-1689 (The British Museum, 1998), cat. 153 and cat. 148. 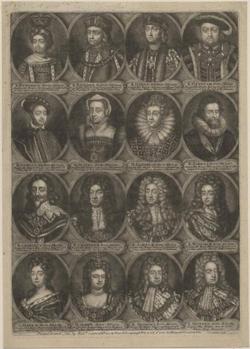 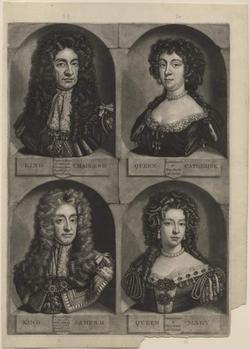 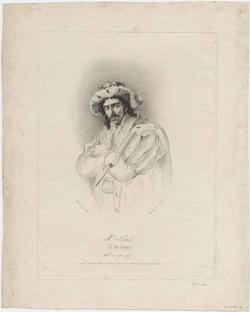 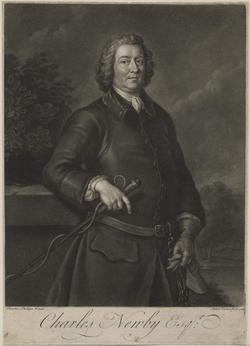 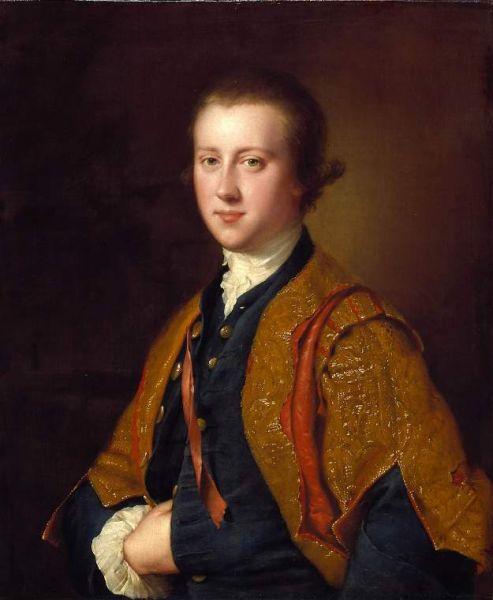